The Sidney Myer Free Concerts are the perfect soundtrack to summer in the city at one of Melbourne’s most iconic outdoor venues. Admission is FREE and gates open at 4.30pm, entry is on a first in, best dressed basis.

Full conditions of entry can be viewed below.

Join us at the Bowl for a free night of colourful music-making under the stars. The Melbourne Symphony Orchestra will kick off with the virtuosic Roman Carnival, taken from Berlioz’s opera Benvenuto Cellini, before Australian pianist Jayson Gillham takes centre stage – performing the sumptuous and passionate melodies of Rachmaninov’s much loved Piano Concerto No.2.

Take a romp through a highlights package of Tchaikovsky’s Sleeping Beauty before the MSO return in full force, with the hit 1812 Overture.

Revel in a piece of music that took the composer just 6 weeks to write – tugging all the Russian heartstrings in a commemoration of Napoleon’s retreat from Moscow in 1812 – no one can argue how spectacularly popular it has become.

Running time: 1 hour and 45 minutes, including a 20-minute interval

A heady mix of sharp edged melodies and distinctive beats from Prokofiev, Kats-Chernin and Rachmaninov will echo across Melbourne’s CBD skyline, in the second concert of the Melbourne Symphony Orchestra Sidney Myer Free Concert series.

As a true enfant terrible, Russian composer, Sergei Prokofiev was never shy of coming forward, with his ballet, Romeo and Juliet becoming an international showpiece, made famous by its violent and stormy depiction of the star-cross’d lovers’ tale. MSO Associate Conductor, Benjamin Northey takes the Orchestra through excerpts of this epic work.

The MSO is delighted to welcome Elena Kats-Chernin, one of Australia’s leading composers, as its 2017 Composer in Residence.

Running time: 1 hour and 40 minutes, including a 20-minute interval

The evening will open with music from Stravinsky’s ballet Petrushka (revised 1947). This work fused music, choreography and décor in a depiction of the tragic demise of the human spirit. In the ballet (widely acclaimed as one of the most popular productions of the Ballets Russes), three puppets come to life; their awakening gives them emotions and love and jealousy ensue…

Korngold’s salute to Waltz king, Johann Strauss – Straussiana – follows this before the evening comes to a rousing conclusion with Richard Strauss’ Suite from Der Rosenkavalier, filled with dramatic melodies and gorgeous waltzes. So, go on – dance like nobody’s watching!

Running time: 1 hour and 40 minutes, including a 20-minute interval 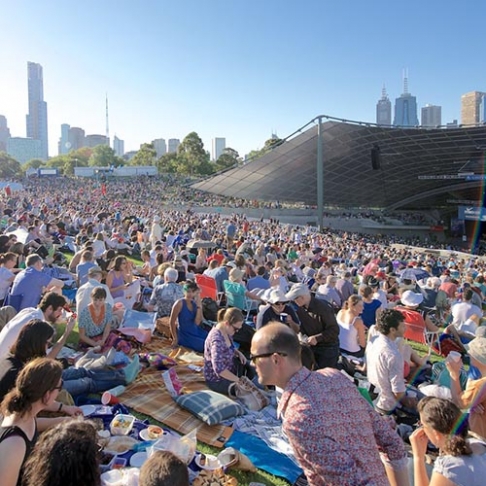