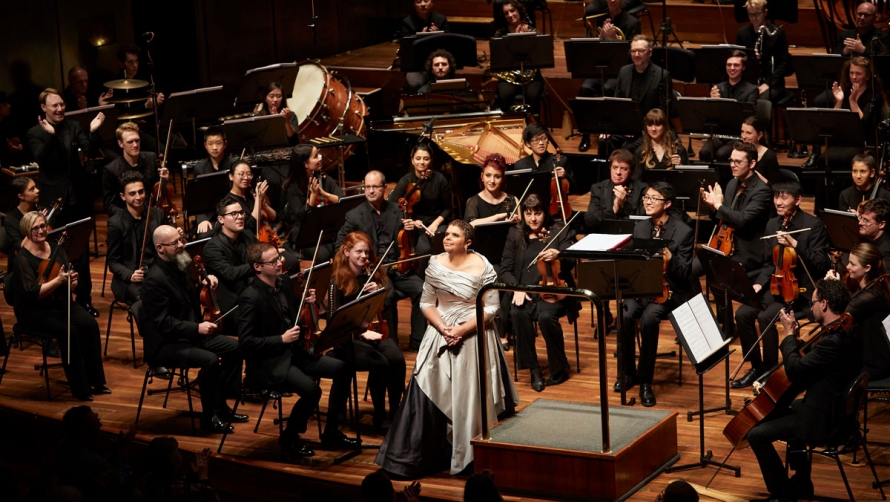 Eumeralla, a war requiem for peace breaks the silence of so many decades and serves to amplify the importance of our nation’s shared history. – Deborah Cheetham.

Written and composed by the acclaimed Deborah Cheetham AO, Yorta Yorta soprano, and MSO Composer in Residence, this requiem for peace is sung entirely in the ancient dialects of the Gunditjmara people.

Eumeralla, a war requiem for peace brings into focus a period of Australia’s history based on the Resistance Wars southwest of Melbourne between 1840-1863.

MSO First Violin Sarah Curro worked alongside Deborah Cheetham and musicians to present the Bunwurrang acknowledgement of country, Long Time Living Here which is performed at the start of MSO concerts.

‘Deborah’s continuing mission is fuelled by the ancient and sacred power of sharing difficult stories through music and this is especially focused in this work. I was fortunate to be a part of this epic work as a tiny cog in the orchestral and choral machine; the difference in this case, compared to a Verdi or a Mozart requiem, was this requiem meant something direct and real to us all,’ said Ms Curro.

MSO Managing Director Sophie Galaise said: ‘While our live performances have been paused due to the restrictions on public gatherings, the whole orchestra is delighted to be bringing this amazing performance in to the online space.’

Melbourne Symphony Orchestra presents Thursday Night (in) with the Symphony
Eumeralla, a war requiem for peace
Thursday 23 April, 7.30pm
Tune in from home on the MSO’s YouTube channel or visit mso.com.au/youtube

Eumeralla, a war requiem for peace has been made possible with the help of Gunditjmara language custodian Vicki Couzens and linguist Kris Eira. Presented in collaboration with Short Black Opera.