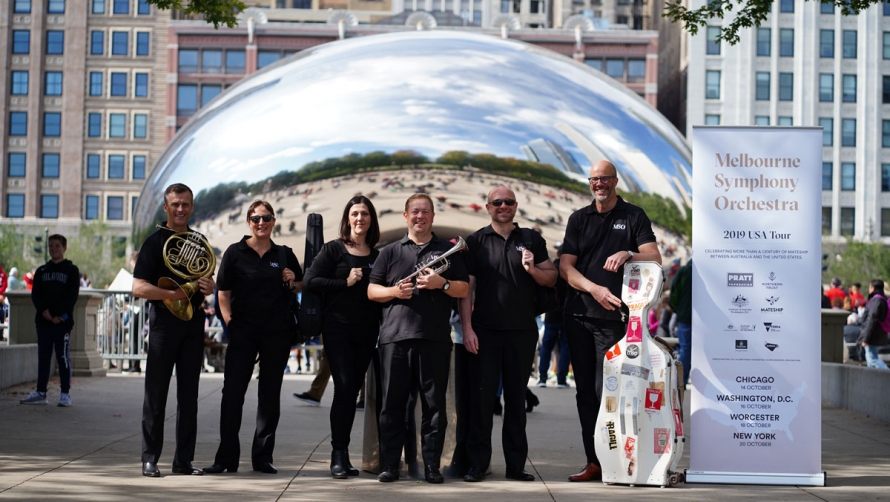 With five tonnes of freight, 93 visas and more than 600 flights, the Melbourne Symphony Orchestra has returned from its triumphant tour of the United States of America, with standing ovations and encores in Chicago, Washington DC, Worcester (MA), and New York.

MSO Managing Director Sophie Galaise said the Orchestra was delighted to have returned to the USA.

‘’It’s been almost 50 years since the MSO last visited the USA and we received such an incredibly warm welcome from audiences across the four cities we performed in.

‘’It requires many talented people to produce a tour of this level on the other side of the world and I am so proud of the MSO. It was an honour to have brought the music of the Melbourne Symphony Orchestra to America and the global stage,’’ said Ms Galaise.

First stop was Chicago which saw the Orchestra honour the 50th anniversary of the Apollo 11 lunar mission in a program co-produced with Anthony Pratt. The sold out debut at the Symphony Center on 14 October featured actor George Takei – Mr Sulu from the USS Enterprise – as host, a guest appearance by decorated American astronaut Charlie Duke, and stellar performances by acclaimed jazz musicians Kurt Elling and James Morrison, led by MSO’s Principal Conductor in Residence, Benjamin Northey.

The MSO performed for the very first time at The John F. Kennedy Center for Performing Arts in Washington DC, and the renowned Mechanics Hall in Worcester, on 16 and 18 October respectively, playing a program of Ravel, Beethoven, Stravinsky and Sculthorpe with Chief Conductor Sir Andrew Davis at the helm. The Orchestra was joined by legendary American pianist Garrick Ohlsson, and Australian didgeridoo player Harry Wilson.

While in Washington DC, musicians took in the sights and sounds of the city with pop up performances taking place at the Lincoln Memorial, Korean War Memorial, National Museum of the American Indian, Museum of Natural History and the Library of Congress.

For their final US performance, the MSO returned to New York’s illustrious Carnegie Hall for the first time since 1970. This concert was led by MSO Concertmaster, Dale Barltrop and showcased contemporary Australian works by Iain Grandage and Carl Vine AO, alongside orchestral classics.

As part of the Orchestra’s focus on learning and engagement, the MSO programmed orchestral workshops, masterclasses and performances with the Chicago Youth Symphony Orchestra, and with students at Neval Thomas Elementary School (Australian Embassy Adopted School) and Duke Ellington School for the Performing Arts, both in Washington DC.

Reinforcing Victoria and Australia’s position as a leading contributor to global arts and culture, the MSO’s USA Tour celebrated music as the universal platform for mutual understanding. A number of diplomatic events were held throughout the tour, highlighting the strong relationship between the MSO and in-country colleagues representing Victoria and Australia. Accompanying the tour was a group of MSO patrons and Board members who cheered on the Orchestra in each city.

For images, reviews and tour stories, check out the MSO’s Tour Diary.

★★★★ ‘’The orchestra performed wonderfully with the quirky, reflective and inspiring multitude of musical selection… The evening was a multi-layered program that was truly out of this world.” – Mary Crylen, Chicago Stage Standard.

“…at the outset, the orchestra and its chief conductor, Sir Andrew Davis, seemed content to be the smoothly competent model of a modern jet-setting ensemble. The strongest moments of the evening came when the orchestra dug into a palpable sense of sound, space, and identity — including its own.” – Matthew Guerrieri, The Washington Post