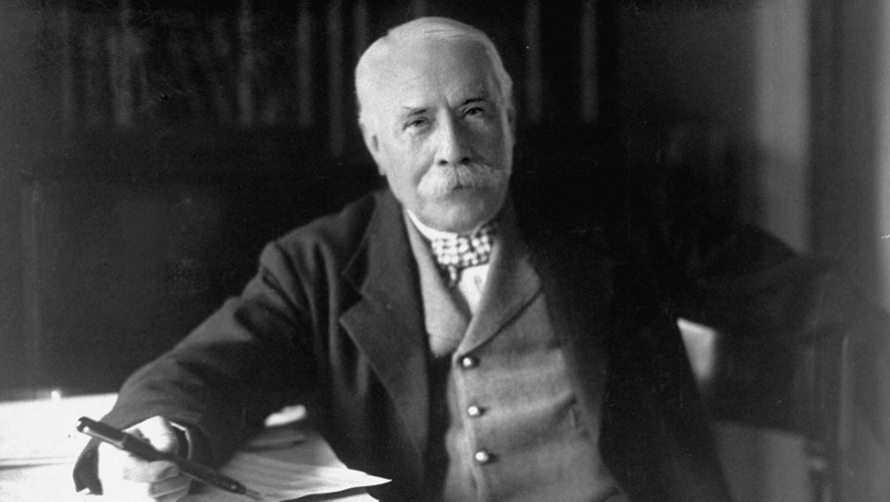 > I am dedicated to love and friendship.
> I include a musical self portrait.
> What am I?

With a cigar in hand, one night Edward Elgar sat down at his piano and began to play. As he drifted into oblivion, his wife interrupted telling him “Edward, that’s a good tune.” As the conversation progressed she asked, “What is that?” to which he responded, “Nothing… but something might be made of it.”

Something was made of it. That night, and later that piece of music, completely changed the composer’s life. Referring to the tune as “Enigma” Elgar, for fun, created variations that have since been described as musical caricatures of his closest friends.

Written for his beloved Alice, the composer wrote that this continuation of the theme was to be romantic and delicate, “… those who knew C.A.E. will understand this reference to one whose life [was the] inspiration.”

Dedicated to Hew David Steuart-Powell, a member of Elgar’s Chamber trio, this was the first of the Variations Elgar shared with his wife, and she enjoyed it so much that its themes were repeated Variation XII.

The plucking of the violin strings and woodwind doublings represent the bicycle bell that Richard Baxter Townshend was known for ringing all over town. In this Variation, Elgar also perfectly imitates Richard’s tendency to raise his voice when overly excited.

Of William Meath Baker, who was known for his dramatic exits, Elgar wrote: “This Variation was written after [he], forcibly read out the arrangements for the day and hurriedly left the music-room with an inadvertent bang of the door.”

Richard P. Arnold, son of the poet Matthew Arnold, was a young philosopher of whom Elgar wrote, “His serious conversation was continually broken up by whimsical and witty remarks.” – a common theme in this Variation.

An amateur violinist who attempted to learn the viola under Elgar’s guidance, Isobel Fitton ended her lessons stating, “I value our friendship too much.” Elgar featured the viola as a homage to his former student.

Another of Elgar’s less than successful students, Troyte Griffith is represented in this Variation through the “uncouth rhythm of the drums and lower strings” and then “later the strong rhytym suggests the attempts of the instructor (E.E) to make something like order out of chaos…”

This Variation is less about Winifred Norbury and more about her charming home that was the site of many performances and musician gatherings. Something the composer cherished very much.

Written in reference to August Jaeger (Jaeger is the German for “hunter,” and Nimrod is the “mighty hunter”), this Variation is one of the most adored of all the themes. Its inspiration came at a time when the composer was giving up on a life of music, but August stepped in and asked him to think about how Beethoven must have felt, having to compose while going deaf. He then began to sing parts of Beethoven’s Pathetique. Elgar later wrote that the opening of this Variation suggests the Beethoven work, “Can’t you hear it at the beginning? Only a hint. Not a quotation.”

With a slight stutter, that Elgar depicted in this Variation, Dora Penny assisted in turning part of this composition into a family affair. Her stepmother was the sister of William Meath Baker (Variation IV) and she was also the sister-in-law of Richard Baxter Townshend (Variation III).

Dr. G.R. Sinclair, an organist, who owned the dog for which the Variation is based; “The first few bars were suggested by his great bulldog Dan (a well-known character) falling down a steep bank into the River Wye; his paddling up stream to find a landing place; and rejoicing bark on landing.”

Of this Variation, Elgar wrote that it “ is a tribute to a very dear friend [Basil Nevinson] whose scientific and artistic attainments, and the wholehearted way they were put at the disposal of his friends, particularly endeared him to the writer.”

The sense of longing that can be felt in this in this Variation comes from Lady Mary Lygon, who at the time of composition was on her way to Australia with her brother who was to become the Governor of New South Wales and as such couldn’t be contacted, hence the three asterisks in place of initials!

These are no one’s initials. Instead, they are C.A.E.’s nickname for her husband. Consider this Variation a self-portrait; written to show those who didn’t believe in him exactly what he intended to do.