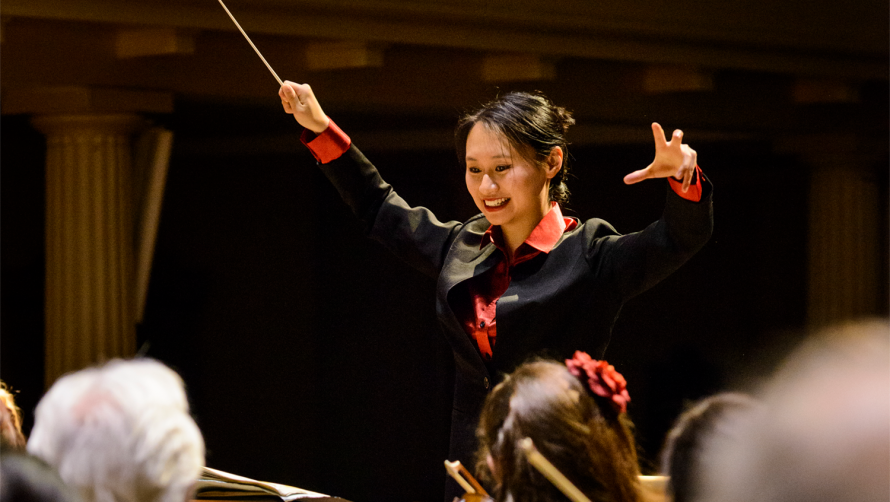 To celebrate International Women’s Day, MSO Assistant Conductor, Tianyi Lu, speaks about how a lack of female presence in the field meant she almost didn’t pursue a career on stage.

I was in Los Angeles during the Women’s March in January this year, conducting the LA Philharmonic at the Walt Disney Concert Hall. It was a beautiful day, not just for women but for all who believed in inclusivity and diversity. I was quite surprised when I was surrounded by two dozen girl scouts who came up to me after the concert to ask for my autograph. It was a special moment for me not because I was being recognised, but because they and their parents were so excited to have the chance to see a woman on the podium. When I was their age I had never imagined a career as a conductor.

My gender is something that I’ve always been aware of, especially in my profession. When I began I had never seen a woman conduct a professional orchestra before. I grew up loving classical music, and seeing only men on the podium left me with an unconscious bias.

It wasn’t until I was in the second year of my University studies in New Zealand as a composer that my high school teacher, Peter Thomas, had asked me to conduct one of my own pieces. When I first stood onstage with the musicians, I felt like I was home. I felt free, like I was flying.

Standing on that podium felt like a culmination of everything I love.

Later, when prompted to pursue it as a career, I had no idea it would be possible for me, but realised that I had no choice – this was something I had to do, it was my destiny, regardless of my gender. And I have been fortunate to have met so many encouraging people along the way who have helped me on my journey.

I’d always been interested in the connection between movement and sound. As a child I was constantly dancing and singing, and I experience music on a very physical level. I think of a conductor as a conduit for energy on stage. The energy that I find as a blueprint in the score from the composer becomes infused into my body and the body of the musicians, and is transferred to the audience. For me, being a conductor isn’t about control – it’s about communication and allowing a story to unfold.

I studied under the late John Hopkins and he said, “Humility is the greatest quality that a conductor can have. You are a servant to the musicians. You are a servant to the music.” This has always stuck with me. Over the years since his passing I’ve done a lot of work in Europe and the UK, studying with some great conductors and orchestras, and I’m constantly reminded that great music making is about great collaboration, which cannot happen without compassion and humility.

Ultimately I believe that as human beings we are made to tell stories and to share experiences. For me all art is about breaking barriers, it’s about walking in someone else’s shoes and becoming transformed through the process. Greater inclusivity and diversity can only enrich the world. Therefore, I celebrate International Women’s Day as a day of empowerment, and quote Marianne Williamson: “As we let our own light shine, we unconsciously give other people permission to do the same.”