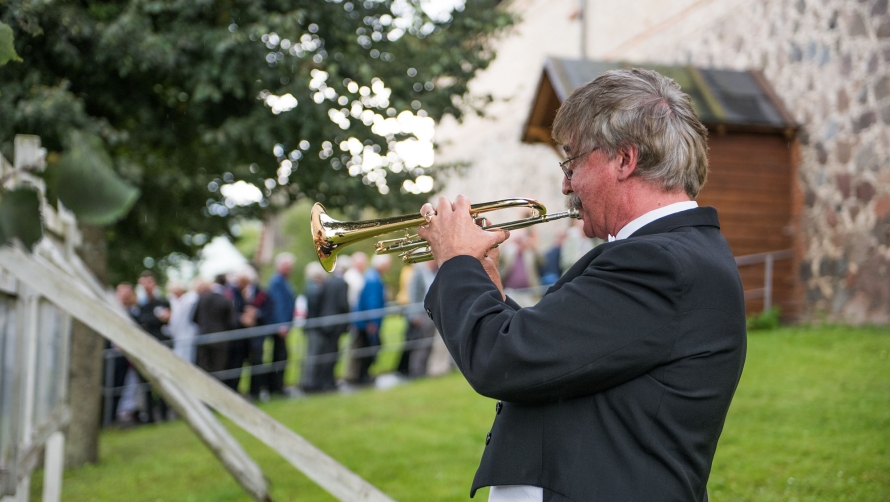 If you ask around the Orchestra, everyone will tell you that Geoff Payne is ‘a sweetheart’, ‘an incredible player’, ‘a legend’. For almost forty years, Geoff has been an integral part of the MSO. He has played in some of the world’s most incredible concert halls, been on a variety of international tours, and performed for hundreds of thousands of people here in Melbourne.

His career started in Sydney, playing casually with the Sydney Symphony Orchestra from the age of 15, before moving into a full time position as Third Trumpet in 1979. He didn’t know much about classical music, “I had played in brass bands, but didn’t know anything about the great classical works. One of my earliest classical memories, though, is when the late John Hopkins was performing a big Proms concert in the Sydney Town Hall, which was eye opening, and terrific,” said Geoff.

“It was tough to learn more about classical music in those days before CDs, and when records were expensive. You didn’t have access unless you were playing it. I still remember working in my father’s post office for two weeks to save up enough money to buy box set of Mahler, because I wanted to listen and learn!”

Working with the MSO meant that Geoff was able to colaborate with some of the world’s greatest soloists, conductors including Conductor Laureate, Hiroyuki Iwaki, and now Sir Andrew Davis. “Maestro Iwaki was here for a long, long time. He was a great man. In about 1992, he invited me to work with his amazing orchestra in Kanazawa, Japan. He’d always set it up to have one or two guests in the sections, and he often invited me there to do concertos with them.”

The appointment of Sir Andrew Davis as Chief Conductor in 2013 was a surreal moment for Geoff, having watched the career of this great man for many years, “My dad was an amateur musician and always told me, ‘You watch this Andrew Davis!’ because of course, back then he was only Andrew! He was a fantastic appointment for Melbourne, and still is. The city loves him, and his persona. I think it’s just fantastic,” said Geoff.

“Every conductor does great things, but especially Sir Andrew and his programming. He takes great interest in the people playing in the Orchestra which is so, so, so important. Sir Andrew will always take a bit of time to speak to the ladies and the gents outside the green room, or the stage door, and build that personal connection and it makes you play better. He’s always had a fantastic eye on stage. He looks at you, not because he thinks you’re going to miss your cue but because he trusts you, and he wants you to know that.”


“My greatest love is still playing the trumpet. I’ll never stop playing. I can’t. It’s in my blood.”

1982: “I won the ABC Concerto Competition (later called ABC Young Performers Award) which opened a lot of doors for me, I was asked to play concertos in a bunch of different orchestras and recorded a couple of records off the back of it which was a special moment in my career.”

2017: “A very personal highlight for me would be the Indonesia tour earlier this year when the Orchestra put enough faith in an old man like me to do the concerto. We did the Haydn over there, which was pretty special but it was also recognition that even people who have been playing their instruments for a long time can still perform the challenging works.”

2017: “I had such a glorious way to finish. I knew I wanted to do Harry Potter, and Star Wars, and Christmas. My wife Julie retired from the MSO after 27 years last year, and her final concert was the Christmas one so it was great to finish on the same high that she did. Plus, Julie came out of retirement for the night and joined us on stage which was pretty special.”

After coming off stage from his final performance, with wife Julie by his side, Geoff knew that the future of his section lies in the hands of Shane Hooton, Associate Principal Trumpet. Shane had been talking about getting a new trumpet for a while, and in a moment of selflessness, Geoff handed his beloved trumpet over to the next generation.

“Shane has wanted a new trumpet for a while, and I thought it would be a great gift, and I wanted my trumpet to stay in the section.”