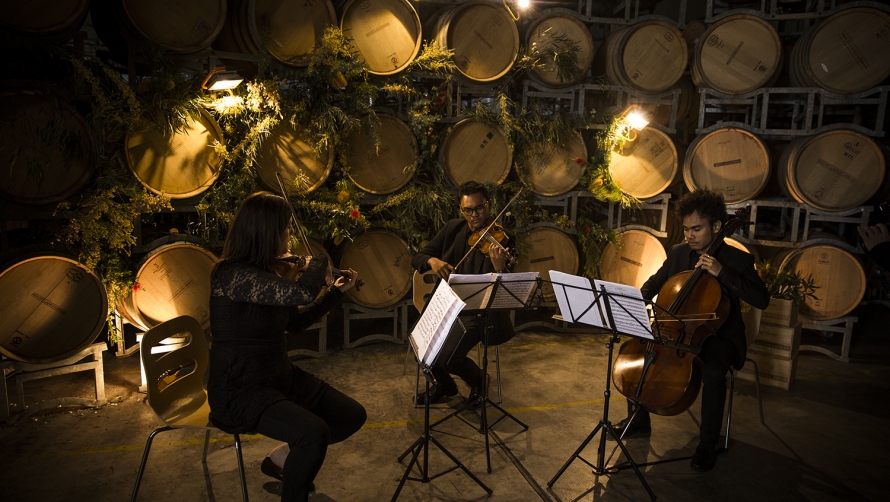 In 2016 several members of the Orchestra travelled to Yogyakarta and invited young musicians to take part in a Music Camp. An array of talent was discovered and nurtured during these intensive workshops, and these students were later invited to join the MSO on stage at the renowned Prambanan Hindu Temple during the orchestra’s 2017 tour.

Two of these students, Longgi (cellist) and Elgar (violinist) were approached by His Majesty Sri Sultan Hamengkuwono Xand offered scholarships to come to Melbourne and learn side-by-side with the MSO across November.

With less than a week until their departure, Longgi and Elgar have written of their time in Melbourne.

Two years ago the Melbourne Symphony Orchestra and the Cultural Office of Yogyakarta organised a Youth Music Camp program with five string players were invited to take part.

Earlier this year the MSO returned to Yogyakarta as a full orchestra and held a concert with local music students, including us! We were invited back to represent the Music Camp, and we did not expect that this beautiful event would lead to us studying with the MSO in Melbourne!

During our time in Melbourne we both learned a great deal about how a professional orchestra works for players and the crew. This opportunity has meant that we have experienced so many new and amazing things. We learnt about music, how to manage an orchestra, and the culture of Melbourne.

Being part of the MSO for four weeks is an experience that we will never forget. We can’t wait to go back home and tell of our time in Australia, and offer lessons to all of our music friends. Our time here has been so valuable, and we hope that programs such as this will have a good impact on the development of orchestral music in Yogyakarta.

Q & A with Longgi and Elgar

When did you first start playing music?
Longgi: I began playing the Guitar and Drum when I was young, and then began at a local music school to pursue music. I loved playing those instruments, but one day a teacher told me to try the Cello. I knew nothing about classical music, but after learning more about the instrument and how to play, I love it.
Elgar: My father is a viola player, so I learnt classical music from him. I began to play the violin at age seven, and had a two year break between the ages of thirteen and fifteen. I love playing music, and I’m glad I started playing again!

What do you like to do when you’re not playing music?
Longgi: I like to learn more about music… and also play ping pong!
Elgar: My life is all about music. I love it. I also play in a rock band
Longgi: He’s a rock star!

What’s your favourite thing about being in Melbourne?
Longgi: The people. Everyone is so kind, and makes us feel so welcome!
Elgar: He took my answer! Everyone is so organised in Melbourne. Everyone is on time. The culture is great here too. We are so happy. I can’t believe I’m here.
Longgi: It’s like a dream come true!