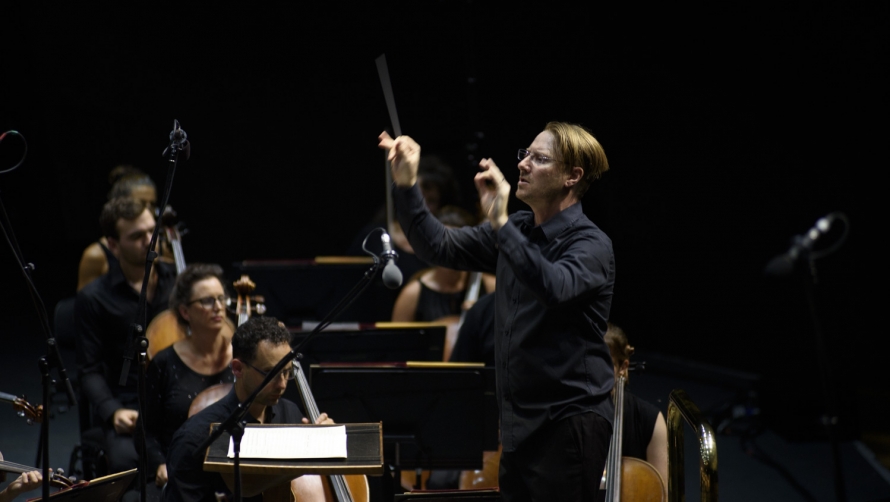 Associate Conductor Benjamin Northey discovered a hidden treasure when preparing for his upcoming performance of Elgar’s Enigma Variations at the Melbourne Town Hall this month.

On July 27 & 28 I will be conducting concerts at the Melbourne Town Hall with the MSO featuring Edward Elgar’s most popular work, the Enigma Variations. It is a work about relationships, beginning with an opening statement of his ‘enigma’ theme’. The 14 variations in the work depict people special to the composer, their characteristics and the nature of his connection with them.

When I first started studying conducting in 1999 my teacher was the British-born conductor John Hopkins. John was by that stage well and truly a legendary figure in Australia, someone who had really done it all. Before he eventually got to Australia in 1963, he had spent six years as Principal Conductor of the BBC Northern Orchestra (now the BBC Philharmonic). British orchestral music was in his DNA.

By the winter of 1999 I well and truly had the bug for conducting and jumped at the opportunity to assist John at the State Music Camp of Victoria. I was such a fledgling that my ‘assisting’ really largely consisted of sitting and listening to rehearsals, carrying things and making cups of tea. Elgar’s Enigma Variations was the main work in the program and I remember becoming totally absorbed in it. Watching John work, I realised that it had never really occurred to me that he must have also had at some point a teacher who had got him started.

John was kind enough to leave me some of his scores when he passed away in 2013. Amongst them I recently found his score of the Enigma Variations, a hard back original edition from 1899. The name on the front wasn’t John’s however, but ‘Joseph Lewis’. When I opened the cover out tumbled a pile of letters and photocopied clippings and articles about the piece. There was also the inscription ‘Christmas 1929’ on the inside cover. It turned out that Joseph Lewis was John’s first conducting teacher at the Guildhall School of Music in London in the mid-1940s. He was born in 1878 which would have made him 21 years old when the Enigma Variations was premiered in 1899!

I found a letter from a Phyllis Lewis, presumably Joseph’s wife, who had written to John after Joseph’s death in 1954:
…I wanted to ask if you would care to have one of Joe’s full scores as a memento of him, for I know he would like you to have something which he had used. He was tremendously proud of your work, and always listened to your concerts whenever possible. I had thought the Enigma Variations might appeal to you if you haven’t already got one. It was a great favourite of his and I would like to think of you using it…

The score contains Joseph’s markings including some hand-written instructions which are attributed to ‘Elgar’. It seems that Joseph may have had the chance to meet and discuss the work with the composer himself. The pages are quite shiny and a little hard to turn. The paper has a slightly brown, aged hue to it but structurally it’s in remarkably good condition. The turned up corners on the bottom right are discoloured with fingerprints suggesting it has been used in many performances, probably by both Joseph and John.

I’ve decided to use this score in the upcoming Melbourne performances of this iconic work. It’s such a special reminder of John Hopkins, but also a reminder that everyone has had teachers and mentors who have played a significant part in their early development. No doubt Joseph Lewis would be quite intrigued to know that the score for Christmas in 1929 would end up being used in Melbourne in 2017!