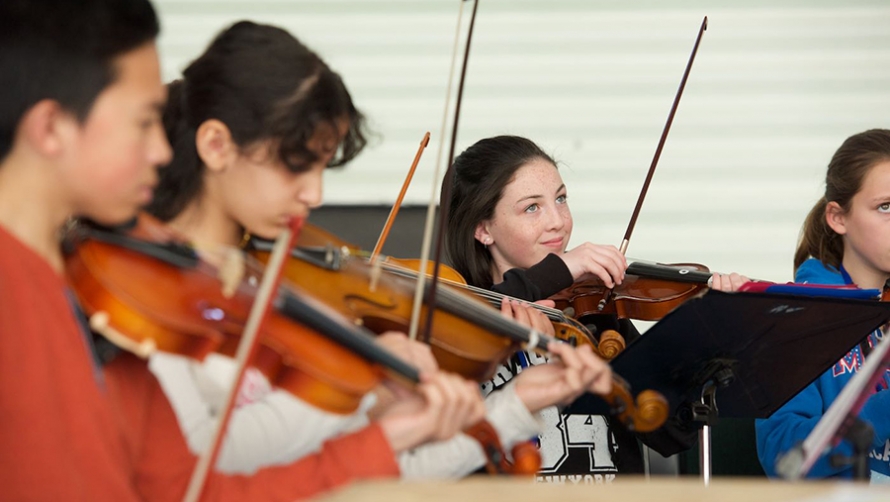 Plush velvet seats, dimmed lighting, and the overture-concerto-symphony trifecta: it’s the perfect setting in which to enjoy classical music. Or is it? For an ever-growing number of orchestras around the world, this image of the main stage ‘art for art’s sake’ concert hall is fast losing its monopoly over company strategy.

A new truth is emerging: in order to thrive, orchestras must now plan to be relevant, meaningful, and accessible to a wider variety of audiences than ever before. For the students, teaching artists, and administrators of Sistema-inspired programs worldwide, identifying the right model for this kind of engagement is, quite literally, child’s play.

Melbourne Symphony Orchestra (MSO) is in the process of implementing a new strategic plan. I’m extremely proud of the process, and here’s why: the dreaming and doing traditionally undertaken by the Education and Community Engagement team is experiencing a significant shift away from the periphery and towards the core of our work as a company.

A prime example of this is the MSO’s own Sistema-inspired community music program, The Pizzicato Effect. This afterschool model, servicing 70 children from 20 schools in the City of Hume (situated in Melbourne’s north), represents an evolved and considered response to Melbourne’s multicultural community. The program’s existence within the domain of MSO’s broader offerings also marks a company-wide commitment to placing learning at the heart of MSO’s daily operations. Located within a community home to migrant and linguistically diverse populations, our program could not exist without a company willingness to adapt. For example, more than a third of our students speak two or more languages at home. As a result, the MSO – having long operated in the domain of western orchestral tradition – now regularly prints communications in Arabic, Turkish, and English, and our program staff work onsite with students from over 14 different language groups.

Our local community has acted as a catalyst for MSO’s reassessment of ‘what we do’ each day as an orchestra.

We know that our challenges are not unique. Over the previous few weeks I have spoken to several of the world’s orchestras leading the charge in community minded programming to find out how Sistema-inspired initiatives are sparking positive change not only within their communities, but within the orchestral tradition itself.

For many of these companies, the key to long-term strength and sustainability now lies in maintaining meaningful partnerships with community.

“Before we even called it (the program) YOLA, we were looking for community partnerships,” says Leni Boorstin, Director of Community and Government Affairs at the Los Angeles Philharmonic Association (LAPA). “We always thought of it as a partnerships program.”

The word ‘partnership’ is trending in educational circles. But what do successful partnerships look like?

Ms. Boorstin suggests that the active employment of a three-point partnership model has been the key to YOLA’s success: shared responsibility, shared management, and shared financing. Since its inception, YOLA has relied upon its strong network of community partners – not least its relationship with the Los Angeles Philharmonic – in order to function effectively and to its full capacity.

In Australia, the message from funding bodies is clear: it is no longer acceptable for orchestras to operate solely within the comfort zone of main stage orchestral tradition. So it is that many orchestras are starting to consider the incorporation of Sistema-inspired programs into the orchestral space as the ultimate model for developing, strengthening and maintaining healthy relationships with community.

Sistema-aligned programming is inspiring a healthy model of access and inclusion in this space. I personally feel that one of the most significant changes The Pizzicato Effect has inspired in our company is a belief in the tangibility of using music as a tool of social change. As classical musicians, we have always believed that the act of engaging in music-making is inherently inspiring of this change, but as a company, we now we see proof of this on a daily basis.

According to Petra Kloo Vik, Education Manager at Gothenburg Symphony, an orchestra that maintains a key role in the development of El Sistema in Sweden, “the future taxpayer will no longer accept to pay for orchestras if they aren’t relevant to more people than just the small percentage that chooses to come to our concerts”.

With average audience ages continually on the rise, Sistema-inspired programs are also affording orchestras the opportunity to draw in younger audiences. For Ros Giffney of Sistema Aotearoa (SA), the program represents “a close and positive partnership with the Auckland Philharmonia Orchestra (APO) that provides young people with unique, inspirational opportunities”.

SA engaged with more than 1000 students in 2016 alone. Importantly, programs like this are now encouraging a culture of mutual exchange whereby orchestras gain the interest of new, young lovers of classical music while concurrently investing in the skills and wellbeing of this audience.

As Peter Garden, Executive Director, Performance and Learning at Royal Liverpool Philharmonic/In Harmony Liverpool suggests, “an extensive and outstanding learning program that genuinely engages your local community across age groups is part of what a 21st century orchestra should be”.

Nonetheless, the establishment of such programs is not without its complexities. Changing education policy, the often unpredictable status of philanthropic support and the reduction of budgets affecting community partners’ ability to sustain meaningful partnership are challenges at the forefront of many programs’ daily operations. Sometimes progress can be slow.

Ms Kloo Vik says the Sistema programs of Gothenburg haven’t yet inspired the rate of progression for instrumental skill development that its orchestral community has hoped for.

“There are a lot of explanations for this,” she says “(but) the best way to address these worries was reminding the orchestral community of the important starting point (of reaching out to new audiences)”.

Sometimes all it takes to identify that starting point is the simple yet powerful will of a champion for the cause. Camilla Sarner’s (El Sistema Sweden), first meeting with Gustavo Dudamel was life changing for this very reason, as was the support of her senior colleagues.

“(Dudamel) was so enthusiastic and took the initiative to suggest we start a project together. (Artistic Director of Gothenburg Symphony Orchestra) Helena Wessman was very resolute and clear that it was both a very good idea and in the exact direction that the orchestra wanted to move”.

José Antonio Abreu has insisted that music be recognised as an agent of social development because of its ability to transmit the highest of values – solidarity, harmony and mutual compassion. While it is clear that the orchestral tradition is both enabling and constraining in encouraging this social change, it is undeniable that Sistema-inspired programs put into practice the very values that contemporary orchestras seek to employ.

Orchestras that take the leap to include these programs in their offerings can provide an opportunity for the very thing that most will agree they now need to survive: change.