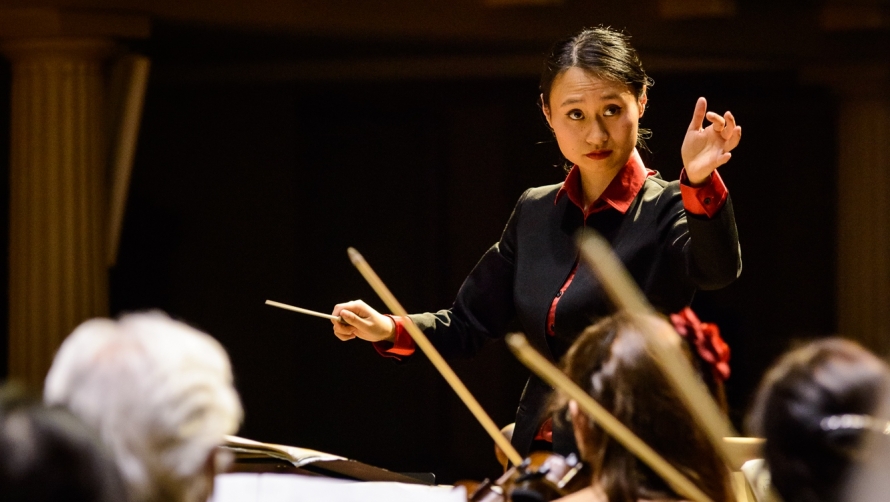 Tianyi will spend two years working with the MSO, embarking upon an intensive residency under the Orchestra’s Chief Conductor Sir Andrew Davis who said he was thrilled to be working with Tianyi.

‘This is an orchestra that takes seriously its role as an Arts Leader and its responsibility to nurture the next generation of musicians, soloists, composers and conductors. I am proud of the orchestra’s reputation for artistic excellence, its commitment to the Australian music scene and the important work it does for developing artists.

‘Many young conductors may collaborate with smaller ensembles such as trios, quartets and possibly chamber groups, but to work with a full scale orchestra – because of its size and logistical complexity – remains a very rare experience.

‘Now it is my turn to share my accumulated knowledge with the next generation!’ said Maestro Davis.

Tianyi began conducting studies at the University of Auckland with Uwe Grodd and Karen Grylls where she completed her Bachelor of Music with first class honours, before studying with John Hopkins at the University of Melbourne. She then went on to study in the UK with David Jones at the Royal Welsh College of Music and Drama where she is currently the Junior Fellow in Conducting.

Tianyi said she was utterly thrilled and humbled to be offered the role with the MSO.

‘The opportunity to work with the incredible musicians and personnel of the MSO in my favourite city in the world is a dream come true. I am really looking forward to developing and collaborating with Sir Andrew, conductors, guest artists and musicians of this world class orchestra.’

Tianyi was encouraged by Eckehard Stier at the Auckland Philharmonia Orchestra to pursue conducting as a career whilst at the University of Auckland and was subsequently one of the youngest participants in the Symphony Services International conducting training program.

She has since continued her development in Europe. In masterclass or assistant roles, Tianyi has worked with conductors and ensembles including Bernard Haitink and the Lucerne Festival Strings, Sir Mark Elder and the Hallé, Thomas Søndergård and Xian Zhang with the BBC National Orchestra of Wales.

Tianyi will commence with the Melbourne Symphony Orchestra in June 2017.

The Melbourne Symphony Orchestra Assistant Conductor position is funded by the Cybec Foundation.