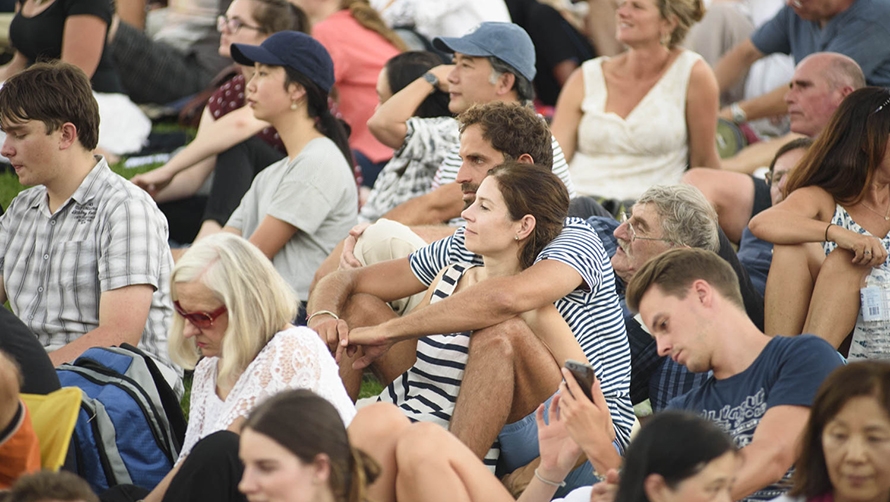 And let me tell you, people were Russian to get a place on the grass! I arrived at 4:45pm. My friends were late. I impatiently sent them a text, they replied with, ‘Walking slowly. We sweaty’. People were flooding through the gates; I was actually worried that we’d miss out. That was, until, I reminded myself that the Sidney Myer Music Bowl can seat 10,000 people, AKA a lot. My friends finally arrived, and to their defence, they had provided the goods. Cheeses, breads, crackers, fruits, prosecco; I was in for a good night.

It was a ridiculously hot afternoon, which eventuated into the most stunning of Melbourne nights. The sea of people was getting bigger, and bigger, and the night was close to beginning. Now, disclaimer: classical music is not my forte (side note, I’ve just found out that forte is some sort of musical word…). I’m more of a Delta G kind of guy, who enjoys some Aussie Punk, and of course the entire Chicago soundtrack. I was out of my depth. I didn’t even know how to pronounce Tchaikovsky, and to be perfectly frank, I still don’t.  But that didn’t matter. My only job was to listen, and enjoy.

As much as I want to sound like I know what I’m talking about, I don’t. So, I’m going to go as basic as I can. The opening number was by Berlioz, and Google tells me that he was a man who loved to part his hair on the side, and could definitely pass for a hipster, should he still be alive. Then there was something with a piano. It sounded incredible, and fun fact; the piano is a part of the percussion section of the orchestra.

Interval came and went, and was timed perfectly with the sunset. The bats began to fly overhead, the city skyline was practically on top of us, and the music began to play. At this point of the night my wine and cheese buzz was starting to wear off. I lay on the grass, become one with a mosquito, and watched the stars come out while the Orchestra played Tchaikovsky’s Sleeping Beauty. A stunning piece accompanied by a stunning view; I began to feel as though I was the only person there.

The audience was an eclectic bunch. Filled with people of different ages, backgrounds, and nationalities. There was a young man sitting near me from the United States, here on holiday. He and the two ladies behind him became friends, and saved each other’s places while they did bathroom trips. I witnessed first dates, group catch-ups, alone time, but most importantly, I saw people enjoying themselves. Classical music isn’t the easiest thing to comprehend, but this is the perfect location to try.