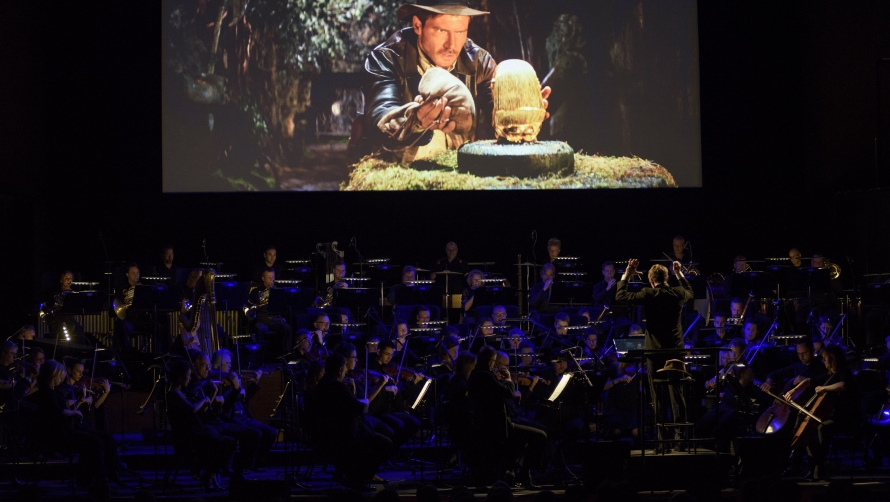 When Rogue One: A Star Wars Story opened in cinemas and revealed the Rebellion’s desperate attempt to steal the Death Star plans from the dreaded Empire, it became the first of the core live action movies to not feature a score by legendary composer John Williams.

Michael Giacchino has stepped in, again – having previously been passed the Williams baton for Jurassic World. For a certain generation, it’s Williams’ iconic movie scores that are indelibly seared into their collective conscious. From Indiana Jones’ boulder sprint to E.T.’s flying bike ride, the toothy menace of Jaws to the infant Kal El’s last-minute rocket from Krypton’s annihilation in Superman, they’re the soundtrack to our childhoods. His magic has the power to transport the viewer to adventure beyond the stars or deep below the sea, long after the final credits have rolled.

In an ongoing celebration of Williams’ career, the Melbourne Symphony Orchestra (MSO) marked the 35th anniversary of Raiders of the Lost Ark by performing the score to the Harrison Ford-led movie live at Hamer Hall last month, with Jurassic Park to follow in March 2017 before Harry Potter and the Philosopher’s Stone and then The Chamber of Secrets in November.

MSO associate conductor Ben Northey says that the reason his oeuvre sits so well alongside the company’s traditional The Masters Series repertoire is because Williams can truly hold his own with the likes of Stravinsky and Tchaikovsky.

“His orchestrations are as good as any of the great 20th century composers,” Northey insists, “I love Stravinsky’s quote that, ‘great composers don’t borrow. They steal,’ and in the Raiders score, I hear influences quite clearly from Bartok, Stravinsky, Prokofiev, Rachmaninoff and even going back to the romantic composers like Tchaikovsky. You can’t listen to Star Wars without hearing Gustav Holst, The Planets.”

Northey wonders if Star Wars and its sequels would have been quite so huge without Williams startling fanfare almost blasting audiences out of their seats in 1977, as the now-iconic yellow scroll filled the starry screen. “He made those films better than they actually were; gave them a nobility, an artistic integrity that raised them to another level. It was because he wrote in a very complex and challenging way for the orchestra and the audience. He really stretched the players of the London Symphony Orchestra and you can hear that in the films.”

Of course, some of the great composers wrote for film too, with Northey pointing to Sergei Prokofiev and Dimitri Shostakovich. He also adores the work of Austrian composer Erich Korngold who went on to have a profound effect on the Golden Age of Hollywood, scoring movies like the Errol Flynn-starring Technicolor swashbuckler The Adventues of Robin Hood in 1938.

For many, Hollywood blockbusters with big budgets are their first exposure to the joys of a symphonic orchestra, and Northey says embracing truly great films scores as part of their repertoire can create a bridge to more traditional composers, ultimately expanding the audience for MSO.

“The audiences for these concerts come to watch the film, they come for the music,” Northey insists. “So it’s up to us now to find a way to engage those people in the future and invite them to come and have a musical experience that’s standalone. It’s about giving them a journey to the Masters Series.”

While there has been some pushback from a handful of older players, Northey says for the most part the film score concerts have been embraced joyously. “When you say we’re going to do Raiders or Jurassic Park, their eyes light up and they’re right into it.”

Next year also brings a showcase of Jonny Greenwood’s atmospheric score for Paul Thomas Anderson’s epic oil drama There Will Be Blood. “Williams is the most famous, and quite frankly he writes in a way that makes the orchestra sound fabulous, just fantastic, but not every film composer has the same level of sophistication and orchestration,” Northey says, “Jonny Greenwood has written the most extraordinary film score for There Will Be Blood that I would describe as a modern film score, and I don’t think there’s a better example. It appeals to a slightly different audience again.”

“The studios, realising how popular these live experiences have become, have gone to great lengths to sort out the rights to allow them to be heard.”

Eventually he hopes that the scores can step free from the films and be presented as a suite of music in isolation in much the same way as the MSO does with ballet. “You’ll go along to a concert, you’ll hear a suite of music from a great film score and then a classical work that perhaps shares some common ground. It’s just too early, and that’s what’s so exciting about it is that it’s actually evolving before our eyes, driven by demand, and that’s what I love. It’s such a great opportunity for the orchestra to really capitalise on that connection with that audience, not just as a commercial venture, but as an artistic one.”

The Sydney Symphony Orchestra (SSO) has also embraced the music of Williams, performing Raiders earlier this year with Harry Potter and the Philosopher’s Stone almost entirely sold out for April 2017. In October they played Alan Silvestri’s stirring score for Robert Zemeckis’ Back to the Future at the Opera House this October, while a Golden Age of Hollywood suite conducted by John Wilson included the scores from The Adventures of Robin Hood, Psycho, Citizen Kane, Ben Hur and Gone With the Wind.

Ben Schwartz, the SSO’s director of artistic planning, says that the power of some of these golden age scores is such that audiences are entranced by them without necessarily realising they are symphonic experiences, something he’s keen for the SSO to play on.

Schwartz notes that advances in technology have made it much easier to isolate movie scores from the rest of the audio, allowing the orchestra to perform live with the film playing sans score in the background. The studios, realising how popular these live experiences have become, have gone to great lengths to sort out the rights to allow them to be heard.

“There’s something really interesting about it, because it’s categorically a completely different experience than watching a movie at home or even in the movie theatres where you’ve got really good sound,” he says. ‘There’s nothing quite like hearing a live symphony orchestra play this great music at a really high level.”

Like Northey, he’s a true believer. “Movie music is great music full stop. Everybody knows Star Wars, E.T. or Raiders. It’s not even just the melodies, but the colour of it. If you think if the kind of the brilliance of the beginning of Star Wars, that’s something you can only achieve with a great symphony orchestra. When you hear it live, and I have several times, every single time the shivers run up your spine.”

Having re-staged Jean Cocteau’s La Belle et La Bête at this year’s Melbourne Festival, the Phillip Glass Ensemble (PGE), minus the great man himself, are set to return to Australia in March to play his ethereal score to the game-changing cinematic experience that was Godfrey Reggio’s trippy debut documentary, Koyaanisqatsi, at Melbourne’s Hamer Hall then on to WOMAdelaide.

Conducted by Glass’ long-time collaborator, producer and PGE music director Michael Riesman, it’s a startling vision of the clash between nature and man’s rapid industrialisation of the planet.

“Koyaanisqatsi remains a very contemporary film and the issues that it raises, in terms of man’s relationship to the planet are still, maybe more so, vital,” Riesman says over the phone from New York. “And the music is timeless. I feel it’s very much of today.”

A huge project, it took over five years to film, with the PGE given an entire year to work on the score. “Normally when a film gets completed and you’re at final cut, the music has like two weeks or maybe a month to get done, so this was crazy. Godfrey is always respectful of the music. You never have to make sacrifices.”

Collaborating on Reggio’s follow up documentaries, most recently 2013’s Visitors, the free flowing, dialogue free form fits Glass’ expressive work. “His music, by nature, is very adaptable to films because it creates moods as opposed to, to use the Hollywood expression, Mickey Mousing it to mimic the action on screen.”

Though he has conducted Koyaanisqatsi many times now, Riesman never gets tired of performing the score live, which he says is even more impressive despite the fact the original had a full orchestra, whereas they replace the strings and brass with keyboards. “The sound is so much better even if we don’t have the silky strings and the original brass, but I spent a lot of effort to make the keyboard version of those sounds pass and we have enough live vocals and wind instruments that it really does feel very immediate and not just synthy.”

It thrills him to see younger people flocking to the concerts even as he acknowledges they’re all getting on a bit, though certainly not slowing down.

“Koyaanisqatis is something people of all ages can be interested in because it’s kind of a legendary film. Anybody whose parents got stoned in the ‘60s would have seen it, so kids today know about it from them, and they come. When you look out at the crowd, you see a whole different audience than comes to normal symphony concerts. Very eclectic.”

Stephen A. Russell for SBS Movies. View the full article at SBS.com.au.

Experience the MSO performing John Williams’ score to Jurassic Park in a special screen and sound event on 3 and 4 March at Hamer Hall.