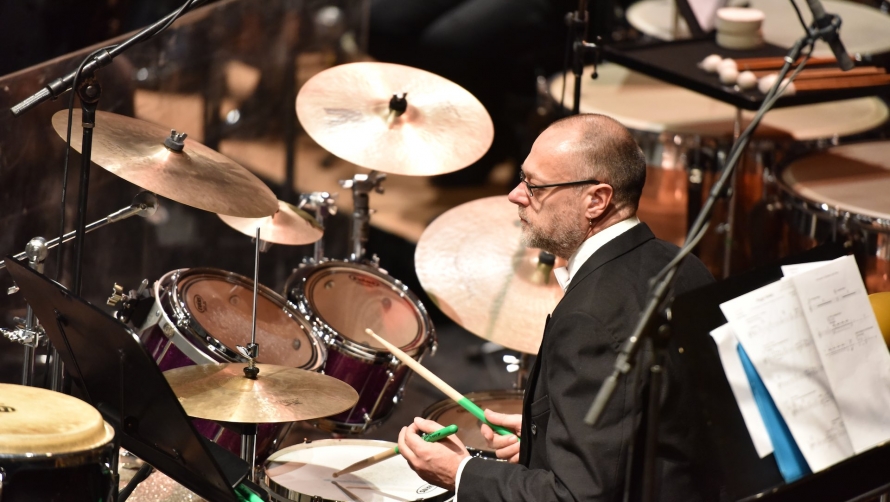 I am from Hobart, Tasmania. That’s where I started playing percussion, then I came to play with the MSO for three weeks in 1989 and I’m still here!

The MSO gig was originally a contract and it kept being extended. After six years there was some extra funding for the position and so I had to audition against heaps of other people behind the audition curtain before I finally got the permanent job in 1995.

I had to play every instrument in the audition. Percussion auditions always include every instrument. For an audition there will be many pages of excerpts and 3-4 pages for each instrument: xylophone, snare drum, glockenspiel, cymbals, bass drum, sometimes timpani, always triangle and heaps of others.

I have a picture of me aged around 6 or 7 and in it I’m playing a toy drum set my grandmother had bought me. I played that drum set until it died! I remember setting it up in the corner of my bedroom and playing it for hours. 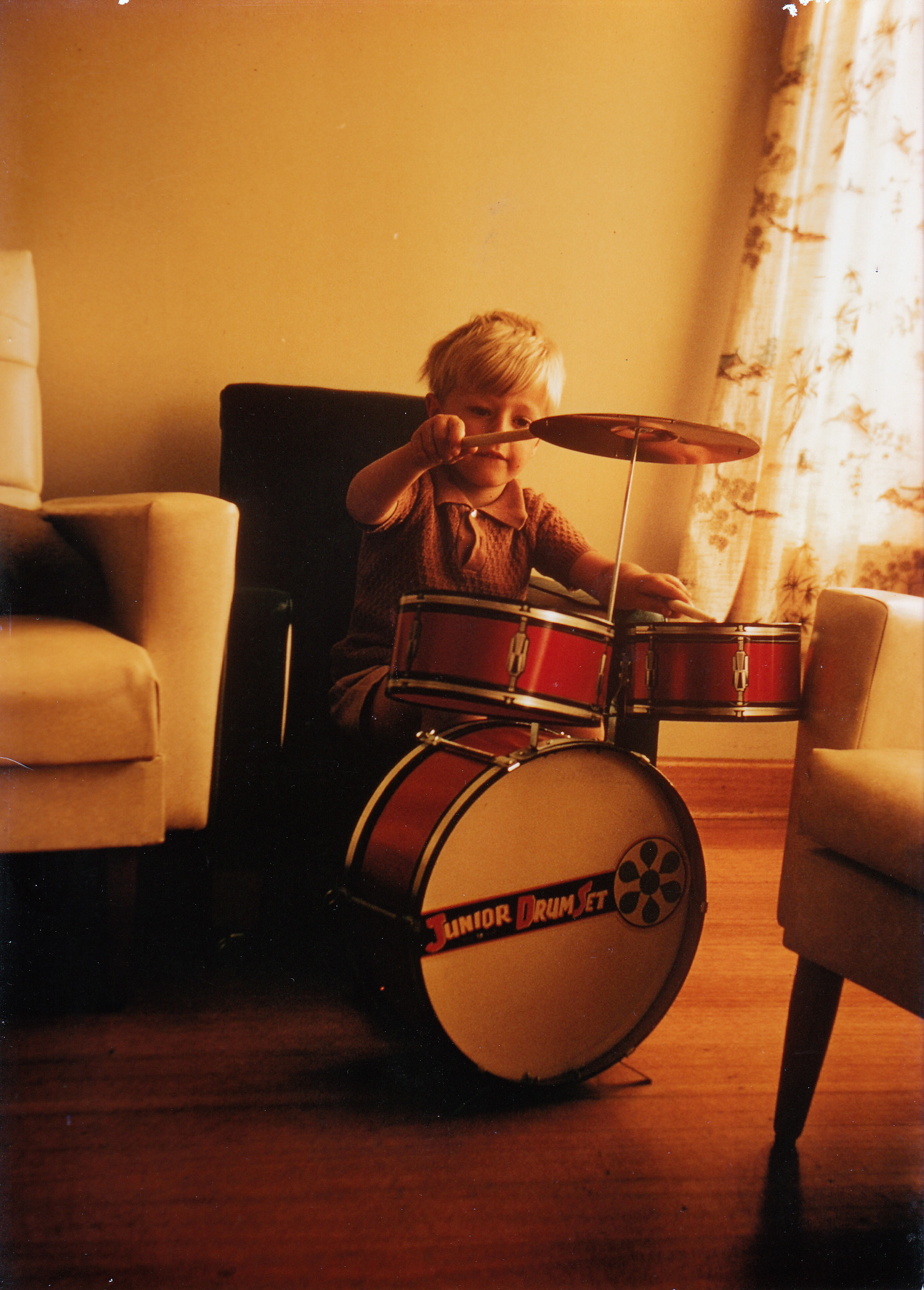 When I was ten, mum and dad enrolled me in some free introductory drum lessons at a local music shop. I was the youngest by far in the class and I felt frightened and small. I signed up and the day before I was due to start I fell over and broke my arm, so it was another six months before I could start.

This turned out to be a blessing in disguise as there was a new teacher at the music shop. Eric Johnstone is a wonder and I was beyond fortunate to have all my lessons with him. He was an inspiring and thorough teacher.

I formed little bands with friends when I was younger, playing in garages. One of my good friends was also learning to play the drums with Eric. His dad was a drummer and we would practice at one another’s houses on weekends, swapping recordings and just having a good time.

I had a number of good friends that went through the youth orchestra and we played in various ensembles together. We would talk and swap ideas and I still deeply appreciate being inspired and learning from all of them. I was also very lucky to be able to spend time with older players who would patiently and generously deal with all of my mistakes and questions.

My first professional gig was playing Friday and Saturday nights at the Black Buffalo Hotel in Hobart with an organist called Merv Coombs. We wore powder blue satin shirts with huge collars (it was 1981!) and played the theme from The Love Boat at least twice every night.

For me, life was all about music. I never had any preferences for the type of music I played or listened to – Strauss, Rolling Stones, Mahavishnu – it was all just playing.

When I was at high school I met Grant Bewick and Phillipa Moyes, great music teachers who encouraged me in a range of music. I still remember the first time I heard Symphonie Fantastique and I thought it was the wildest thing I had ever heard. Grant had given me the Berlioz record to take home and listen to. I had never heard much classical music and would have been 12 or 13 and thought – this guy, this Berlioz, is just amazing and freaky! I still smile in performances of that piece. Mind you, I also thought Hush’s Boney Moronie and Glad All Over was pretty cool.

In 1982 I started working with the Tasmanian Symphony Orchestra as a casual, I was earning money and mum and dad were somewhat happy for me to leave school after year 10 and give it my best shot. I eventually went to the Conservatorium when I was 20 where I didn’t finish a diploma of music but had lessons with the phenomenal Tom O’Kelly.

Cymbals are the best instrument to play. Playing cymbals in a Mahler symphony is sexy and almost as good as ice cream! Pretty much any instrument that you hit or that no one wants to play comes to a percussionist, so I’ve played tin foil, harmonicas, stones, newspaper, beer bottles. I’ve even poured water into a bucket and smashed bits of wood together.

Often I have to find or make the instruments. I’ve had to make the sound effect of a wand and of a bird flapping. I used long thin sheets of balsa wood and flapped them in the air.

There’s a huge element of creativity in playing percussion. Usually sound effects are written into music with words, not notes. It’s better to use more words as this helps a percussionist create the sound as accurately as possible. The creativity is what I enjoy the most. In works like La Mer where it simply says ‘cymbals’ I get to choose which cymbals and which playing technique I want to colour the sound.

As a percussionist, I listen to the level around me and depending on the room, the acoustic, and the size of the orchestra, I put my instrument sound into that mix. Sometimes, I will deliberately place my sound below where everyone else’s is to colour the music. In a big Mahler symphony or similar I would try to be the crest of the wave over the top of the orchestra – well no one has told me to shut up yet during a climax!

Percussion can also be very, very quiet. It’s very easy to play mezzo forte to forte. Playing very loud is quite difficult, but playing very soft is equally as difficult. It’s one of the main things I practice.

It’s the moments where the orchestra is dead quiet and then – a sudden crash. Those moments can stuff you up because you really don’t want to play early. Things can happen. Cymbal straps can break, you can drop an instrument. On a country tour I dropped a cymbal during Tchaik 4 and it crashed to the floor. I still have no idea how that happened.

There was a Henze piece where I had to smash a tray of crockery into a 44-gallon drum. I went to an op shop and purchased a whole stack of crockery from some very nice ladies who were so happy I was purchasing their cups and saucers. I didn’t have the heart to tell them I was going to smash it all to pieces. It sounded so amazing during the concert and there was an awesome mushroom cloud of rust dust that flew up from the drum afterwards.

It’s moments like this that make me feel very special that I get to do something as unique as this every week. I mean, who wouldn’t want to smash crockery for a living?!