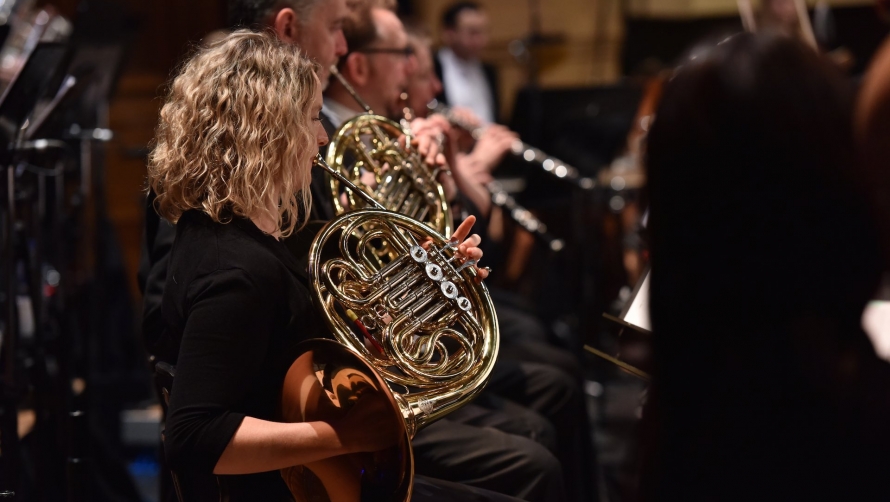 I grew up in Invercargill, New Zealand, a tiny city at the bottom of the South Island. The town has around 50,000 people living there. The Rolling Stones have even toured there!

You could say I was from a musical family. My mum is an alto with a beautiful voice and both my mum and dad are heavily involved in musical theatre. Mum would either sing or work in the wardrobe and dad is a stage manager, so I was always around music to some extent.

I studied performance voice at university and my mum was secretly pleased. The problem was, I was too lazy, I didn’t want to be a chorus member, but I wasn’t hard working enough to be an opera diva. Plus I was too busy doing loads of brass band performances.

I started out in brass bands as a kid when I was 8, playing the cornet (a little short fat trumpet). I was terrible! I was the kid whose instrument lived in the boot of the car week to week and mum would constantly ask me how much I had practiced. I lied all the time. I didn’t enjoy it very much; I couldn’t read music very well, and always fell behind. However, that was one awesome thing about living in Invercargill – there isn’t an orchestra, but the brass band scene is very strong, and I soon learnt to keep up or I’d end up embarrassed in front of my friends.

I met my other half (now my fiancé) Richard when I was a youngster at band camp, and we got together while I was at university. We moved to Christchurch after I finished studying and I was selected to go on a European tour to the world brass band championships with the National Brass Band of New Zealand. I had to raise a whole lot of money to get there so I needed a job really quickly. I got a job as a bank teller.

I was a terrible bank teller, I’m really not good with numbers – every morning I would be handed an error sheet and it would be a huge list of things I had inputted incorrectly. But I was focused on saving money and finally I raised enough to go on the tour.

When I came back from tour, I was still working in the bank.

Then my friend Grant Sinclair, who is an incredible trombonist, called me up for a chat, I think he was a bit worried about me, he knew I was miserable and thought it was ridiculous that I wasn’t really involved in music. He reminded me that I had always wanted to play French horn and I should just do it.

He was visiting in a few weeks and straight out he told me that he had been speaking to the Third Horn with the Christchurch Symphony Orchestra who was expecting my call to arrange some lessons. He had been loaned a French horn from the Royal New Zealand Airforce Band and had spoken to the New Zealand School of Music in Wellington about me coming from a brass band background but wanting to audition on French horn. They were expecting me, knowing I was going to be terrible! I had three months until my audition to sort myself out.

Grant literally left me no excuses. He showed up a few weeks later, as he said he would, with a French horn in a case with a big sticker that said ‘G Spot’ on the front. I didn’t even know how to hold it, let alone what buttons to push. I showed up for my first lesson with Bernie from the Christchurch Symphony and I asked him, ‘How does it work? How do I hold it?’

We drilled through the lessons. I nearly thought that I wasn’t going to be able to do it. I practiced my butt off and got through my audition and started studying towards a post graduate diploma in performance horn.

I remember I was too embarrassed to practice in the practice rooms at university. Everyone else sounded so good. I literally felt like I was starting all over again, the French horn felt totally foreign. I also had to get used to playing valves with my left hand. It was like learning a whole new language. All the scale patterns were different.

I nearly quit halfway through the year, it was just so hard, and I sounded so bad. I knew how I wanted to sound but I couldn’t make it work.

But I learned how to survive and I worked so hard to conquer my fear of failing, and practiced harder than I have ever had in my life. What kept me going was that I knew I wanted to be a musician.

A couple of years of hard work earned me a position in a chamber orchestra, the Southbank Sinfonia, in London.

After a year in London, I moved to Sydney and had a busy schedule as a freelance horn player.
I had a few auditions that I did quite well in, and a pretrial in Perth which made me realise that I really could do this and finally won the position with the MSO. I burst into tears when I heard the news. It was awesome.

Now Richard and I have a beautiful baby girl, Harriet, who is 11 months old. I feel like this is what I’m meant to do: be a mum and play the horn.

It’s really hard juggling the two roles. I struggled in the early days when I was on maternity leave. To be honest, I didn’t do much playing outside of feeding Harriet and sleeping. I really started to miss playing. It was one thing that was about me and just for me. Being a horn player is a part of my identity and playing the horn was something that I had done for hours every day for years before Harriet was born. I was missing it.

Whenever Harriet sleeps I do some muted practice (putting a mute in a horn to soften the sound). When she’s awake I often do warm ups while she plays on the floor. She’s a pretty chilled out baby and has just started clapping along with me when I play.

Richard and I have diary meetings where we go over rehearsals, rosters and practice sessions. The logistics can get quite tricky but we always seem to make it work. Schedules change, things get missed, but we get there in the end. We just do it.

2017 is going to be a big year for me. I’m thrilled that Richard recently won a pretrial with the MSO on Second Trombone and we will get to work together. I love my job, there’s going to be a lot of practice, some big programs, our daughter will turn one and I think it’s about time I got my driver’s licence!