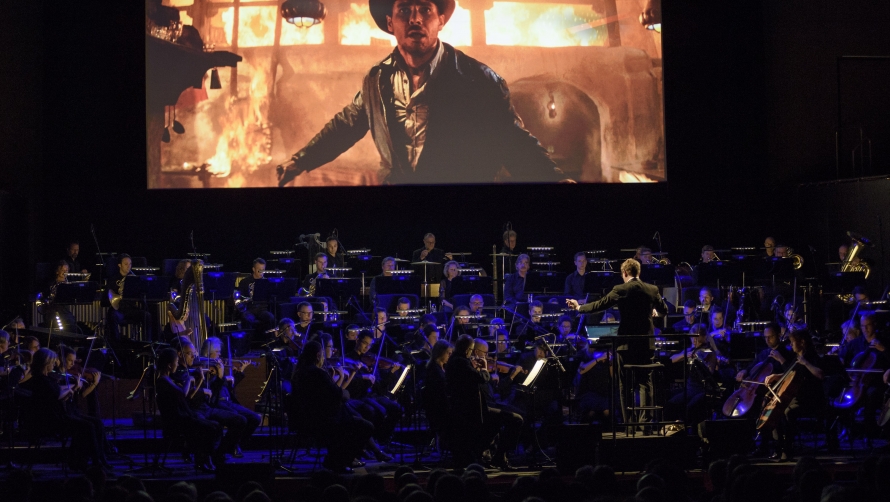 On screen, it’s 1936 and Indiana Jones is off on an adventure to retrieve the Ark of the Covenant. On stage, a breathtaking symphony orchestra plays one of the most recognisable scores ever, by prolific composer John Williams. The elements come together to create an uplifting and engaging theatrical experience.

First up: I’m an Indiana Jones newbie. I know, I know, it’s shameful. Of course, I know the brilliant theme song, but only had a vague idea of who Indiana Jones is and what he does. Before I saw MSO’s Indiana Jones and the Raiders of the Lost Ark in Concert, most of what I knew was that Indiana Jones occasionally ran away from boulders in questionably perfectly-sized tunnels.

I’m no longer an MSO newbie though. After being treated to their celebrations of Star Trek and David Bowie, their live orchestration of Raiders of the Lost Ark continued my MSO journey. Like many others, I didn’t think the MSO had much to offer me. However, I couldn’t have been more wrong and it’s astounding just how much their program has to offer the average person. It’s not just about pretty classical music anymore; it’s about experiencing the media we love in an epic new way.

All movies should be watched with the score performed live by a symphony orchestra. Raiders of the Lost Ark belongs squarely in the group of remarkable 1980s films. Sure, some graphics are laughable in comparison to today’s technology, but it absolutely is notable for its time. It’s an action-packed adventure movie with a touch of history and travel, lead by a bit of a Hunk. There are creepy-crawlies and hilariously stereotypical ‘baddies’. It’s funny, it’s dramatic, it’s suspenseful but most of all, it’s impressive.

It was wonderful to see families gather with their children to watch this movie together for the first time, and what a way to witness it. Next to us were two children with cowboy hats and their parents wearing Indiana Jones shirts, no doubt creating memories together that will last a very long time. There were people from all walks of life in the prestigious Hamer Hall. That in itself is special.

Having a presenter, in Paul Verhoeven, open the night added a wonderful sense of community and comedy. The vast majority of the audience seemed to know the film intimately and sounded excited to share it with us newbies. Some of Verhoeven’s jokes unfortunately went over my head due to my lack of Indy knowledge. Those that I got though, were hilarious. Oh boy, he was correct about women’s ovaries exploding at a certain scene.

Conductor Benjamin Northey led the MSO with an energetic flair, giving various ‘thumbs up’ in response to the clearly impressed crowd. It’s thrilling to actually see the strings section make all those suspenseful sounds and it ensures your goosebumps and chills are at least doubled. It’s always a delight to see a shining harp poke out over the top of the orchestra. The whole spectacular is so graceful that sometimes you need to remind yourself that this legendary music is actually being played right in front of you and that it’s not a soundtrack. Hearing the brass exclaim the theme is truly exciting stuff.

The Melbourne Symphony Orchestra is continuing to make its brand more exciting and relevant. Next year’s MSO at the Movies seems set to continue the trend of making this orchestra accessible. After Raiders of the Lost Ark, we were treated to a trailer of sorts of the Jurassic Park concert coming in March. It was a fun and light-hearted taste, eliciting laughs and excited mumbles from various audience members.

It’s an exciting time to get involved in the MSO. Your favourite movies come to life in a whole new way when their soundtracks are played live by this exceptional orchestra.

MSO’s Indiana Jones and the Raiders of the Lost Ark in Concert is on 3-5 November 2016 at Arts Centre Melbourne’s Hamer Hall.