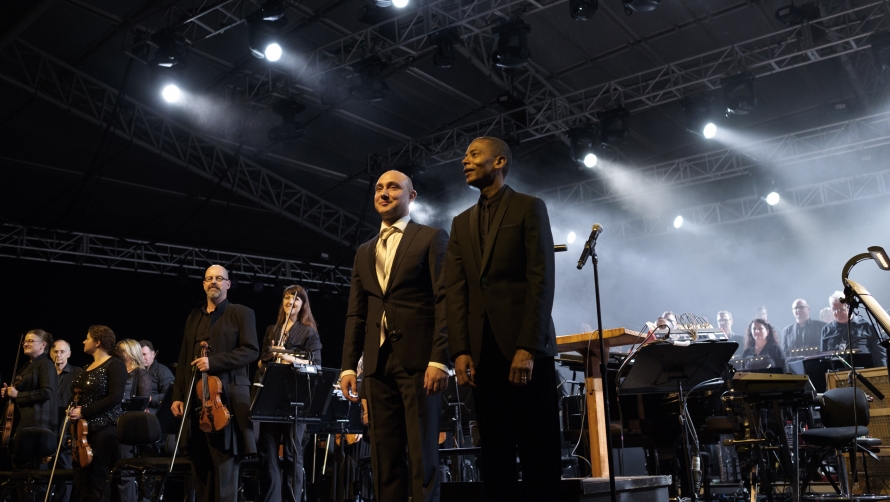 In the early ’90s Philip Glass orchestrated Low – the first album in David Bowie’s Berlin Trilogy with Brian Eno – only to find that various institutions automatically dismissed it as ‘rock’. Glass gave his work the title “Low” Symphony to make a point – and to challenge the establishment. But times have changed. Today, in an age of experimental hybridisation even in pop, orchestras are seeking ever bolder productions.

This past Australian summer, the Melbourne Symphony Orchestra (MSO) – Australia’s oldest, founded in 1906 – presented its most cutting-edge concert yet with Detroit techno DJ/producer/auteurs Jeff Mills and Derrick May at the Sidney Myer Music Bowl. Mills previously brought his Light From The Outside World to 2014’s Melbourne Festival – selling out and receiving wide acclaim. But, back in 2005, assisted by composer Thomas Roussel, he performed Blue Potential with the Montpellier Philharmonic Orchestra, culminating in a CD/DVD. Meanwhile, May – connecting with maverick conductor, arranger and multi-instrumentalist Dzijan Emin – was first accompanied by the Macedonian Philharmonic Orchestra in 2014. He subsequently took the spectacular across Europe and, in a symbolic homecoming, to Detroit. In Melbourne Mills and May finally shared a concert platform, with Emin conducting.

Emerging in ’80s Detroit, May and Mills were friendly rivals. May began creating electronic music – what would be designated “techno” – under Juan Atkins’ mentorship. He launched Transmat Records with Nude Photo. However, it was 1987’s Strings Of Life – a homage to Martin Luther King – that came to epitomise the ‘Detroit sound’. May was hailed “The Innovator” – later the title of a collectible anthology. Mills, an aspiring jazz drummer, was active early as the hip-hop turntablist The Wizard. He then formed the subversive techno collective Underground Resistance (UR) with Mike Banks. In the ’90s Mills ventured out solo with Axis Records. Together with Robert Hood, he advanced techno’s ‘minimal’ genre. While May’s techno emitted a romantic futurism (he re-branded it “high tech soul”), Mills’ became more conceptual – and he harnessed multi-media. Nonetheless, to this day, common to both renegades’ output is the theme of possibility.

Though reactive to Detroit’s racial segregation and post-industrial decline, techno developed into as much an intellectual as a musical movement internationally, espousing transcendence. Detroit techno continues to intrigue audiences with its narrative – and mythos. Now the establishment is embracing techno as avant-garde music. (Word is that a curious Glass himself once studied May’s work, at UK DJ Mark Moore’s insistence.) Coincidentally, May and Mills DJed at separate New Millennial Eve parties in Melbourne, the city long a hub for Detroit techno. And so January’s double-bill was like a meeting of Zeus and Jupiter. Even iconic Australian promoter Michael Gudinski attended, his Frontier Touring Company facilitating the show with the fledgling enterprise Fünf. Before the dusk concert, Mills, May, Emin, and the MSO’s first violinist Sarah Curro participated in an interview conducted by Viridian (aka Shaun Keyt) – a seasoned local techno musician, composer and sound designer. May, animatedly charismatic, and Mills, discreet, discussed their use of symphonic elements in techno – and how this led them on different paths to collaborating with orchestras. May acknowledged the legacy of his music – and its spanning successive generations, families conspicuous at the event. He and Mills then talked about the dilemmas of having their catalogs transposed. For May, surrendering some artistic control was difficult. Mills was occasionally unable to explain to musicians how he’d done things. May concluded that the techno practitioners aren’t aiming to “infiltrate” the classical sphere, but rather to show another perspective on music.

Mills’ program, reconfigured from Light…, was first – the DJ, presiding over Roland TR-909 drum machines, a 303 synth, and mixing gear, to the side of the stage. Mills’ set, distinguished by his abstract precision, transcended the angular industrialism of Axis’ clubbier fare, building dramatically. It was ceremonial – and cinematic. (Indeed, Mills has scored films, most prestigiously Fritz Lang’s seminal silent classic Metropolis.) Mills introduced The March, inspired by late ’90s social protest, from his At First Sight album. Predictably popular was The Bells – originally a ‘DJ tool’ for Mills, but now a (rave) standard. Mills referenced his UR repertoire, Sonic Destroyer exploding. Mills closed with a maximalist arrangement of 1994’s Utopia – arguably his most foreboding record. Next was May’s suite – titled Music Is Music after his old alias, Rythim Is Rythim. He assumed a seat behind two keyboards in the middle of the orchestra. His set contrasted Mills’, being all expressive electro-jazz fluidity – with lushly intricate layers over African grooves. It opened with a percussive Kao-tic Harmony, segueing into Icon – May’s last key single from the ’90s. May revealed a reflective aspect with the ambient St Sunday, one of Emin’s own compositions, featuring Morricone-esque wordless vocals from soprano Michelle McCarthy and mezzo-soprano Cassandra Seidemann. Following the cult ‘banger’ It Is What It Is, the pinnacle was inevitably a magical rendition of Strings Of Life, May sparring with the MSO’s pianist. Herbie Hancock, who’s reinterpreted Strings…, might dig it.

As the encore, May and Mills united on stage to premiere King Of Sopiste – written by Emin, but a fascinating convergence of the DJ/producers’ usually disparate modes. Ultimately, the significance of Mills and May liaising with the conservative orchestral world can’t be overstated. Not only does it represent the advent of a paradigm May calls “electronic fusion”, but it’s also the merging of divergent cultural traditions – European classical and a postmodern African-American music. Detroit techno, inherently transformative, has always defied the stereotypes projected on America’s ‘urban’ scene (and, for that matter, ‘EDM’). It fosters pluralism – and imagines a utopian future for all.