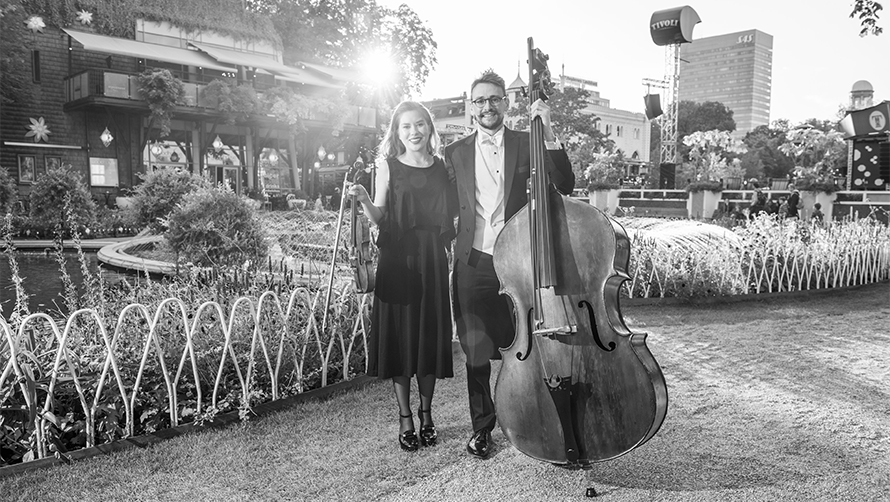 On the stage, double bassist Stephen Newton and violinist Francesca Hiew, otherwise known as Stevie and Franny, are classical stars engrossed in the music they perform together with the MSO.

Away from the stage, life for this terrific twosome is centred around their gorgeous greyhound Duke and their inner-city jungle balcony.

In every orchestra there are couples; it’s only natural that two people performing, rehearsing and practicing together might find they want to spend their time outside of the concert hall together too.

Franny was drawn to Stevie’s enthusiasm and energy. ‘He’s a very popular guy! MSO patrons know him, our neighbours know him, butchers, baristas, Melbourne’s dog owners – they all know him! It says a lot about his character, that he always has time for other people. It’s hard not to be drawn to Stevie – he’s often the person on stage that looks like he’s having the most fun. His driving force is always the music, never anything else, and that inspires me a lot.’

Stevie was attracted to Franny’s positivity, calmness and her unpretentious musicality.

‘The best part about working with Franny is that it makes every moment, even when times are low, fantastic. We quite often play for each other and give each other feedback or discuss our orchestra parts. We look at each other on stage all the time, not only because musicians need to communicate musical information to one another but sometimes she will arrive to a concert and I haven’t see her until then, so we will use our eyes to say hello from across the stage.’

Franny’s mother discovered classical music too late to learn properly so she decided to give her children the opportunity to learn from a young age. ‘Playing a musical instrument was like a rite of passage in my family,’ says Franny. ‘I am down the bottom end of a fairly large family, so I was pretty fiercely keen to follow in the footsteps of my older brothers and sisters.’

While Stevie’s parents also encouraged his musical development from a young age, it was singing that eventually led him to play the double bass. ‘I started singing in a choir when I was very young and learnt to read music and written English at the same time. I was so drawn to music’s power to bring a story to life.’

Outside the busy schedule of an orchestral musician, Franny also plays with the Australian String Quartet, sometimes spending weeks away from Stevie and their beloved greyhound Duke. So how do they spend their spare time together?

‘We take Duke out for long walks together. We travel a lot, sometimes to the country, interstate or overseas and we’re big on food, so we eat out – probably too often – and cook for friends. When we are at home together we tend to our garden on our tiny, tiny balcony which we’re slowly working on turning into an unruly jungle.’

As well as these pastimes, the pair find inspiration in each other and the wider community.

‘I find a lot of inspiration sharing music with people, especially people who don’t normally listen to classical music and discover something in it that speaks to them. I do believe it feeds the soul, for lack of a less corny phrase!’ commented Franny.

‘I think all people who have a loving and happy relationship would be similarly inspired by their partner. Although Franny is very focused and motivated without my help, I like to think that I occasionally inspire her too,’ says Stevie.

The two also find plenty of musical inspiration sifting through their CD collection, mainly listening to ‘classical’ music as well as jazz greats. Franny has even managed to find a few surprises in Stevie’s old cassette tape collection. ‘I once found a 90’s funk version of Handel’s Messiah in the tape deck. Seriously!’