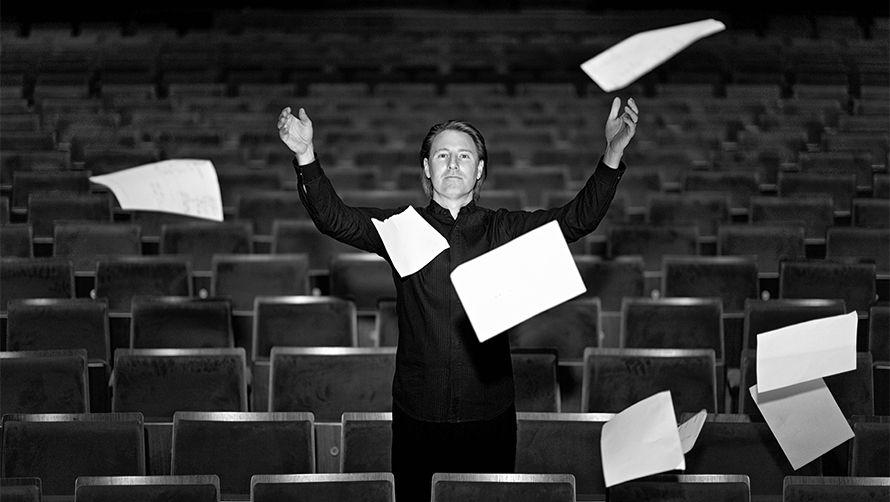 From building planter boxes and doing kinder drop offs, to conducting Schubert’s Unfinished Symphony, Benjamin Northey reveals a week in the life of a conductor (all with a severely sore finger)!

It probably is not the best idea to help build a planter box the day before a big concert with the Melbourne Symphony Orchestra. It turns out 50mm Australian hardwood is unbelievably heavy. A two-person lift, for sure. It is at a hardware store in inner-city Melbourne that I learn this valuable lesson. And I am genuinely surprised at just how much it hurts when I gracelessly drop the plank on my finger, immediately blackening the nail. The pain does, however, provide me with two great moments of clarity. Firstly, I am reminded that I am a complete idiot for being in that particular store lifting a particularly heavy hardwood the day before a particularly important concert. But the second reminder is far more poignant: a moment in the first movement of Schubert’s Unfinished Symphony springs to my mind with a new emotional intensity. The second theme (or tune) of that movement is exquisitely beautiful. It provides a kind of oasis from the surrounding B-minor turbulence and angst the Austrian composer was clearly feeling at the time he sat at the piano to compose it.

But the relative happiness of this second theme is elusive; it quickly becomes softer and further away before disappearing without a hint of resolution. After a brief silence, the orchestra plays a full-voiced fortissimo sforzando minor chord. The impact is immense. It’s like someone slamming their fist on a table in absolute frustration or even, as it so happens, like dropping a heavy piece of wood on your finger. It is the sound of pain.

It is these relationships between the abstract art of music and the reality of human existence that consumes the minds of conductors. Music is the ultimate metaphor and the best conductors are leading emotional expression rather than simply unifying sound. In a rehearsal I could use 100 words to describe in great technical detail the kind of sound I am after for the aforementioned fortissimo minor chord. Or I could simply say ‘This chord should be played as if you have just dropped something heavy on your finger’, and get a much better result.

I’m that guy you might see walking down the street waving my hands around while I silently imagine the possibilities of a particular piece of music. I imagine this looks pretty strange at times. Yet the bringing to life of great music, working with talented and intelligent musicians and the highs and lows of concert performing bring great intensity, meaning and richness to life.

This ‘imagining’ component of the study process comes after many weeks and months (sometimes years, depending on the piece) of intensive study of the musical score (all of the orchestral and choral parts in one printed document). Only once you have fully absorbed the deep analysis of a piece are you ready to think it through.

Unless I am travelling, which takes up about half the year, I am working when I can from my studio at home. It’s a small single room space housing my collection of orchestral and operatic scores as well as a piano and desk. I am a husband and the father of two young children — Eva, 4, and Leo, 2. We recently moved into this house and the studio was meant to be somewhere I could focus undistracted on study. At this very moment, my daughter is banging at the glass sliding door demanding to be let in. It‘s a stand-off from which she will emerge victorious.

The study process is much easier when I am on the road. But the life of a conductor can be a lonely existence. Unlike travelling with a band or a larger cast we are usually a one-person touring party. It’s much less entertaining. And the time away from the family is very difficult on everyone. When I’m home in Melbourne it’s usually a working period with the MSO where I am the associate conductor. I usually conduct the orchestra about 7-10 weeks a year. I admit this work/family balance is something I am still working at managing better. It’s complicated by the reality that music, and conducting more specifically, is much, much more than just an obligation.

The responsibility for the interpretations and for creating an optimal artistic environment for the musicians involved is immense. The build-up is best described as a spring being gradually wound tighter. That spring is released at the first rehearsal.

The kids are young, and sleeping is not their forte. My wife Joanne and I have many interrupted nights. The combination of the lack of sleep combined with the stress levels leading up to the first rehearsals is a potentially toxic one. There is, of course, a time to be ruthlessly protective of one’s physical and mental state, but it is always an appalling look in marital terms. Proclaiming ‘I’m an artist! I can’t work under these conditions!’ at 3.30am after your partner has settled your teething child for the fourth time that evening is probably the most sure-fire marriage ender imaginable. So, while the thought briefly crosses my mind, I choose not to utter that immortal phrase.

Full rehearsals begin a week out from the MSO’s featured program, which includes singers — the MSO Chorus (an eighty voice choir) and two soloists, soprano Jacqueline Porter and bass James Clayton. The main works are the exquisitely beautiful Requiem of French composer Gabriel Fauré as well as a Schubert song for male choir and low strings, and the aforementioned Unfinished Symphony. We rehearse day and night: afternoon with the orchestra and evening with the chorus; most of its numbers have day jobs.

A week of evening rehearsals, however, makes for long days. I am wound up after late rehearsals and don’t go to bed until well after midnight. Fortunately Leo is sleeping better. The extra time is useful and I am glad to be able to drop Eva at kinder in the morning and do some work around the house. The kinder teachers have requested I come in and teach the kids some new songs. I locked it in for next week. Talk about pressure. Fatefully, I head into the hardware store. Finger injury complete, I try to get some rest.

Concert day arrives. I didn’t sleep much last night. Fortunately Joanne, herself a musician, gets the kids up which gives me a slight but important lie-in. I am up at 8am, just in time to see Eva before she goes to kinder. Our recent move was a downsize and a week earlier I had stupidly put eight items on eBay. Six of them sold on Thursday. I spend the morning getting things packed and ready for collection (the last thing I want to be doing, really).

I have lunch and get my suit ready to go. It strikes me that working in an orchestra has to be one of the last remaining professions to involve the donning of white tie and tails as standard workwear. There is actually a lot to carry, cummerbund, patent leather shoes, cufflinks as well as my scores and batons. I usually take dark chocolate and bananas with me too.

We have an hour-long balance call in the venue from 5pm-6pm and then a 90-minute dinner break before the concert’s 7.30pm start time. Seemingly, this is a reasonable amount of time to prepare, but there is a regular hiccup: I have recently started to wrangle with my own bowtie. This remains one of life’s most exacting challenges; in my case, it usually ends in tears. After at least 20-30 minutes I give up and head off seeking help.
Mike, the orchestra manager, is right on to it, and has a pretty close approximation ready for me in only two attempts. I eat the sushi I bought earlier on Swanston Street, scoff down some chocolate and guzzle water. My scores are taken to the podium. Ten minutes.

It’s a sold-out concert so I expect it will take people a bit of time to be seated. I try to relax. I sit and go through some deep-breathing relaxation exercises, visualising the opening of the first piece, listening to the music in my head. There’s a knock on the dressing room door. Stephen, the artist liaison, leads me to the side of stage where I wait for the orchestra to tune.

Then, silence. I walk up seven squeaky stairs on to the Melbourne Town Hall stage, shake hands with the concertmaster, greet the orchestra and audience, turn around, settle.

I glance at the baton in my hand. My blackened fingernail stands in stark contrast to the baton’s white, lightweight carbon fibre, a world away from the hardwood my digits encountered yesterday. There’s a brief tingle of pain, of beauty, of excitement. The very moment its own fortissimo sforzando minor chord.

I wait for focused listening, and, together, we let the music begin.

This article first appeared in The Weekend Australian Review.