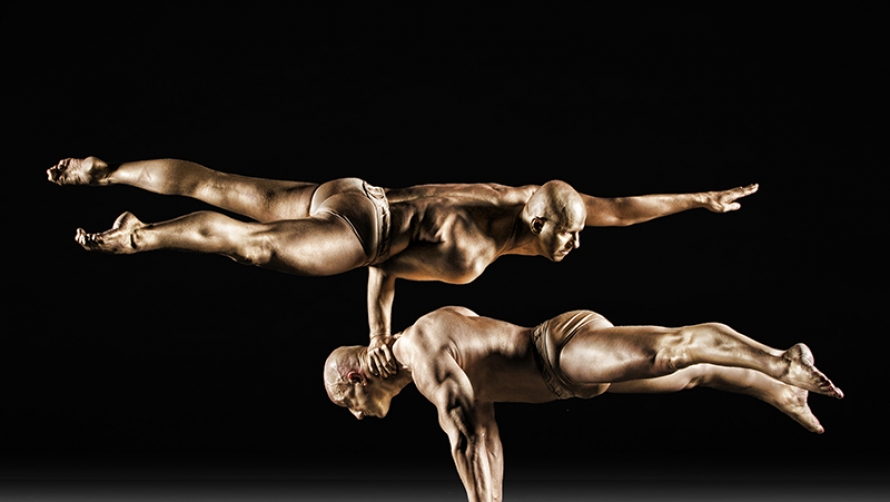 Following sold-out seasons around the world, Cirque de la Symphonie comes to Melbourne this July, bringing a host of international circus performers to the stage.

Cirque de la Symphonie brings the magic of cirque to the music hall, with an elegant adaptation of some of the most amazing cirque acts performed on stage with the Melbourne Symphony Orchestra. The performance will showcase many of the best artists in the world – aerial flyers, acrobats, contortionists, dancers, jugglers, balancers, and strongmen.

‘While the orchestra is playing, the [cirque] performers will be swinging over their heads and tumbling on the floor before them.’

These accomplished performers include world record holders, gold-medal winners of international competitions, Olympians and some of the most original talent ever seen. Fusing the power and majesty of a live orchestra with the best of cirque artistry, you can expect jaw-dropping spectacle of aerialists flying overhead and astonishing acrobatic feats.

Alexander is a Russian aerial artist who started working with famed cirque choreographer Pavel Brun and producer Valentin Gneushev when he was only twelve, performing on Broadway at the Gershwin Theater. The same year he won the gold medal in the competition among international cirque artists at the prestigious Festival Mondial Du Cirque De L’Avenir in Paris.

His combination of natural strength, artistic expression, and grace sets his performance apart from other aerialists. Also known as ‘Sasha’, he has performed for three Russian presidents and the Bolshoi Ballet, numerous symphonies in the US and Europe, and elaborate theater and stage productions worldwide. He continues to be a favorite at music halls, where he soars out over the audience in a spectacular display of aerial artistry or when he sets his riveting spinning cube act in motion.

Christine is a 7-time consecutive National Champion, Female Olympic Athlete of the Year, and Athlete of the Decade in acrobatic gymnastics. As a professional aerialist and acrobat she has performed in the 2002 Winter Olympics, at two Grammy Awards ceremonies, at the American Music Awards, the Miss Universe pageant, and Paul McCartney’s European tour.

She was a trainer and performer with NBC’s Celebrity Circus, and she choreographed the aerials for Britney Spears World Tour and the Stars on Ice US tour. Christine provides spell-binding performances of aerial silks, rope, lira, and trapeze with Cirque de la Symphonie.

The mind-boggling strength and agility of Jarek and Darek’s ‘Duo Design’ provides one of the most powerful acts to be included in Cirque de la Symphonie’s captivating program. This dynamic and exciting balancing act consists of Jaroslaw Marciniak and Dariusz Wronski, former Polish national hand-balancing champions.

They have competed and performed throughout Europe and the United States, winning championships in Evian, France and Sarasota, Florida. Over the past few years, these prolific performers have thrilled audiences at several NBA halftimes, Cirque du Soleil, Circus Circus, Busch Gardens, and the national tour of Cirque Ingenieux. Their Cirque de la Symphonie performances have left audiences stunned and amazed at music halls everywhere.

Vladimir provides a spell-binding performance with combinations of mime and juggling feats. A favorite of the younger members of the audiences, Vladimir’s Red Harlequin act features rings, balls, and batons, and he’s even been known to teach the maestro a trick or two! He is a veteran of Circus Circus, Cirque Ingenieux, and various Cirque de la Symphonie performances.

Vladimir graduated from Russia’s prestigious State College of Circus and Theater Arts and won the gold medal at the Cirque de Demain International Festival in France. His performance with the symphony is pure entertainment and guaranteed to please audiences of all ages.

Elena, the ‘Lady in White’, is a graduate of the famed Moscow Circus School and first-place winner of the prestigious National Russian Circus Festival. From her ‘Master of Sports’ in gymnastics, Elena developed into a unique and graceful performer with the Big Apple Circus, Switzerland’s Circus Knie, and Germany’s Circus Roncalli. Her combination of contortion, balance, and graceful dance moves has made her a major star with Cirque de la Mur in Florida and Circus Circus in Las Vegas.

Elena’s experience with many major stage and theater productions offers a professional background that allows for a truly unforgettable performance with the live symphony. The ‘Lady in White’ provides an elegant touch to Cirque de la Symphonie.

Vitalii began his gymnastic training in the Republic of Moldova and soon competed as an elite gymnast with the Russian national team. At the age of 16, Vitalii joined the Moscow State Circus as a professional acrobat and toured throughout Europe. After a move to the US, he starred in productions at Sea World, Universal Studios and Walt Disney World.

He has been featured in numerous TV ads and won a role in the Walt Disney movie ‘Enchanted’. Vitalii excels in multiple cirque acts, such as duo hand-balancing, straps, Cyr wheel, spinning cube, Chinese pole and the Russian bar.

Irina has earned a reputation worldwide as one of the most entertaining hoops performers in the business. She grew up in a circus family in Moscow, trained by some of the greatest names in acrobatics, gymnastics, and hoops, and traveled as one of the youngest performers with the Moscow Circus.

She was awarded the Grand Silver Medal by the Queen of Monaco at the Concours International Des Ecoles de Cirque in Monte Carlo, and has earned numerous other awards as well. Her exciting performance with Cirque de la Symphonie combines her talents with the hoops, contortion, and dance.