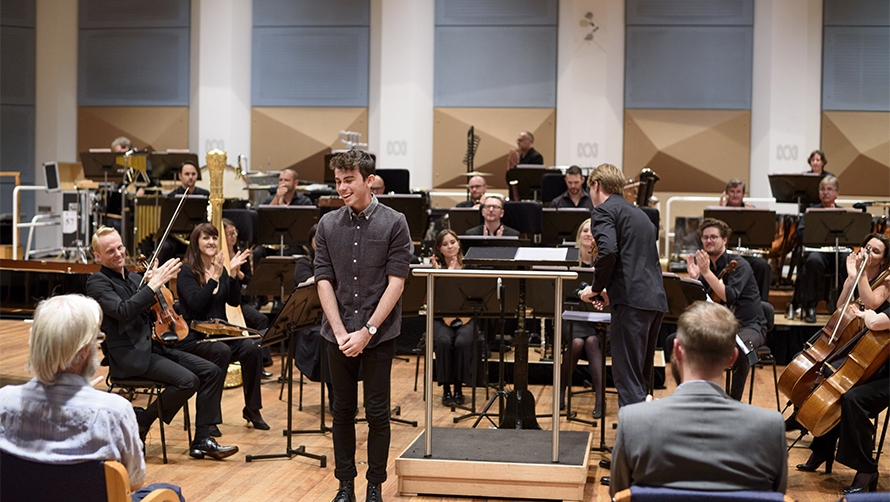 Meet Alex Turley and Michael Bakrnčev, the next generation of Australian composers

After winning MSO’s Cybec 21st Century Composer’s Program earlier this year, Turley and Bakrnčev’s new compositions will be performed live by the Orchestra during this year’s Metropolis New Music Festival.

What instruments do you play?

Guitar, Clarinet and the Kaval, a Macedonian end-blown wooden flute.

My nephew Archie, who has just turned three, makes me laugh every time I see him. A thing called Honest Trailers on YouTube – hilarious! I love comedies, and lately I’ve been watching Brooklyn 99 starring Andy Samberg – it’s a riot. But the funniest person I know is my younger brother Will, and nobody can have me in stitches like him. Thanks, bro!

What does it mean to you as a young composer to have you work presented as part of the Metropolis New Music Festival?

I worked extremely hard to produce a piece that could be deemed worthy enough to be performed at the Festival. Melbourne is my home city and I am proud to be here, and to have my music performed at this city’s main new music event is a dream come true. It opens up some doors to me and my music, having it performed to a wider audience and to be conducted by an international conductor such as Robert Spano.

‘My music is extensively inspired by Macedonian folk music, especially from the region of Lerin in Aegean Macedonia (Greek-Macedonia). So it was difficult for me to respond to the notion of ‘cities’ as my soundworld and thinking does not often reflect the modern, but the traditional folk elements of Macedonian music. This made it a particularly interesting challenge to write a new orchestral work inspired by an area that I don’t usually work in. That being said however, I was still able to combine my Macedonian elements into this piece.’

What inspiration did you draw on when composing Sky Jammer, knowing that it had to be themed around cities?

The initial inspiration came from watching Netflix’s Daredevil series. I loved this dark take on a modern superhero, Matthew Murdock who, despite losing his sight because of exposure to radioactivity, develops other super-sensory perceptions.

This got me thinking about Melbourne and how we have this underground culture – quite literally, in fact. Take the case of ‘The Cave Clan’ – a group of Melburnians who gather together to explore the city’s old sewage systems.

Because I work in the building industry, I have read much about current trends in building design, architecture and real estate development, along with reports on population growth. Melbourne’s population is growing rapidly, and is set to overtake Sydney’s soon, with an estimated 7 million people by 2056.

I started to wonder what this would mean for me, my kids, and grandkids. What sort of a place will Melbourne be? What about infrastructure? Pollution? What role will technology play in residential building?

From all this, I felt inspired to create a neo-noir opera or musical based on a dystopian Melbourne. The original working title was “Burke”, after John O’Hara Burke (he of the ill-fated Burke & Wills expedition). But how to turn this into music?

After discussing it with my teacher, Elliott Gyger, he suggested I consider changing the title and watching more films in the genre of “Daredevil”, titles such as “Blade Runner”. That was the best homework assignment I’ve ever had! I followed his instruction, thought further about many things, and the result was Sky Jammer. For decades we have called them, sentimentally, “skyscrapers”. The title of this work – Sky Jammer – reflects on my own attitude towards the massive structures that dominate our cities. They block our view of the sky, pollute the air and water, and cast shadows on our streets – and in our hearts!

Bakrnčev’s work, Sky Jammer will be performed in Heavenly Cities on 21 May at Melbourne Recital Centre, conducted by Robert Spano.

One of the things that struck me most when considering this theme was the idea of cities as sprawling, messy, dense labyrinths, and that is an idea that stuck with me through the compositional process and very much informed the texture of the piece. I’ve ended up creating more of an atmospheric work than one driven by any sort of narrative. For me, the work evokes the impression of a deserted city, clouded by fog and rain. There is movement in the shadows, just out of reach; bursts of colour and light bleed through the mists. As the piece unfolds, we travel through the labyrinthine structures of the city, encountering echoes and ghostly memories. This is just an idea of some of the images running through my head as I was writing the piece.

‘I generally try to stay away from telling people what to listen for in my music, as that can drastically narrow their listening experience. I love the idea that a piece can mean vastly different things to different people, and I’ve found that as a composer, the way I can encourage this is to use abstract titles and be really vague about what everything means. The title for city of ghosts gives people a starting point, a little seed of an idea, and then I leave it up to them to explore the sound world.’

What musical ideas did you draw on when creating your piece?

I always strive to make music that is fluid and lyrical, unfolding organically and creating a sense of space. For the most part, city of ghosts is built from quite simple harmonic materials, which I have tried to make interesting by stacking up into close harmonic clusters and exploring unconventional sonorities. I like to obscure rhythm entirely and make music that floats around as if in a dreamlike state – in this piece I hold back from committing to any real pulse or tempo until the climax. Something else that excites me is a nice juicy cello solo, so there’s one of those too.

What’s on your playlist right now?

Turley’s work city of ghosts will be performed in City Life on 14 May at Melbourne Recital Centre, conducted by Robert Spano.