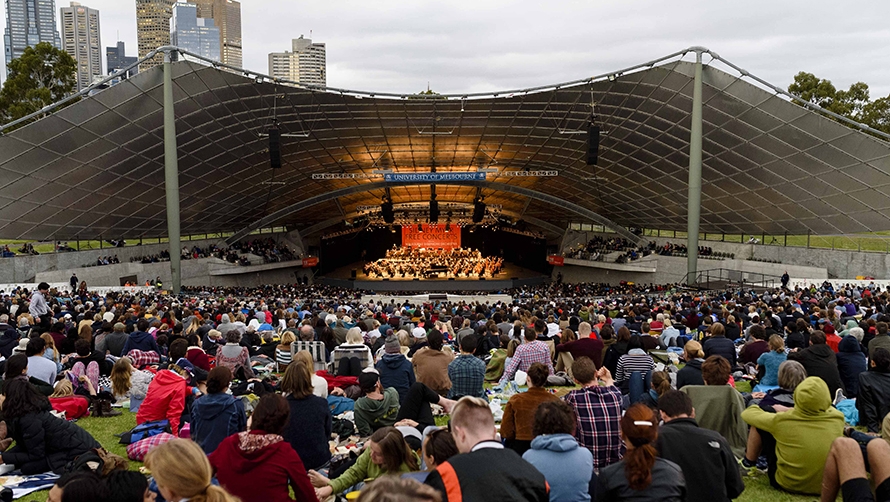 Over the course of three nights, thousands of Melburnians flocked to the iconic Sidney Myer Music Bowl to take in the beautiful sounds of the MSO and to be a part of what has become a much loved annual tradition in the Orchestra’s calendar.

It was another successful year of gorgeous music at the Bowl!

Dvořák Under the Stars

After a rainy morning, the clouds parted and the sun came out for our first Sidney Myer Free Concert – Dvořák Under the Stars.

The clouds have cleared and the sun is shining for tonight's #msobowl concert. Gates open in 5 minutes. pic.twitter.com/XBqP9rhqCA

The crowd started to pour in and the picnic rugs went down.

A video posted by Melbourne Symphony Orchestra (@melbournesymphonyorchestra) on Feb 19, 2016 at 6:18pm PST

The picnic game was strong…

American conductor Joshua Weilerstein joined the Orchestra on stage for his Australian debut.

Heading on the longest trip of my life for my debut with MelbSymphony</a> this week. Can&#39;t wait to be in Australia for the first time!!</p>&mdash; Joshua Weilerstein (joshweilerstein) February 11, 2016

And after the interval, it was time for Dvořák’s Symphony No.7.

‘Dvorak’s Symphony No 7 in D minor, Op 70 saw Weilerstein impress with the discipline of his musical gestures and mature exposition of the works emotional arc. There was much to enjoy, including lovely emphasis to counter melody in the second movement, plenty of bounce in the third’s underlying accompaniment and excellent control of its multiple musical threads.’

A photo posted by Melbourne Symphony Orchestra (@melbournesymphonyorchestra) on Feb 17, 2016 at 1:41am PST

White Night Melboourne was upon us and the Melbourne weather gods were playing nice!

Over 10,000 Melburnians flocked to the Sidney Myer Music Bowl to enjoy a balmy summer’s evening with the MSO.

#msobowl 1 of the 10,000 – brilliant performance by our Melbourne Symphony Orchestra pic.twitter.com/0WLwZI3ALV

Joshua Weilerstein took to the podium for his second appearance with the Orchestra, opening the night with Dvořák’s Carnival.

Then it was time for Barber’s Violin Concerto, featuring the MSO’s own Dale Barltrop as soloist, followed by Tchaikovsky’s Symphony No.5.

Tchaikovsky Symphony No.5 at #msobowl tonight was amazing! Cried my eyes out like a little kid!

The Tang of the Tango

It was another night of gorgeous weather for our final Sidney Myer Free Concert – The Tang of the Tango.

It's the perfect way to end the #msobowl concerts this summer. Beautiful weather and music to have a fiesta to! pic.twitter.com/nj9h84lPF0

Benjamin Northey joined the Orchestra on stage to perform a Spanish-South American program to a crowd of 10,000 people.

Big shout out to the amazing 10,000 strong audience at tonight's #msobowl concert! Thank so much for joining us, lots of fun coming up!

First up was Falla’s The Three-Cornered Hat: Suite No.2, followed by Rodrigo’s Concierto madrigal featuring guitarist brothers Leonard and Slava Grigoryan as soloists.

A photo posted by Melbourne Symphony Orchestra (@melbournesymphonyorchestra) on Feb 25, 2016 at 6:23pm PST

The Grigoryan Brothers graced the stage again for Piazzolla’s Oblivion and Libertango, and were joined by Dianne Heywood-Smith and David Backler from Sidewalk Tango, specialists in Tango Argentino.

A photo posted by Melbourne Symphony Orchestra (@melbournesymphonyorchestra) on Feb 27, 2016 at 2:21am PST

Look at that crowd!

The sun started to set as the night was coming to an end.

It was another great night of beautiful music under the stars at the iconic Sidney Myer Music Bowl.

A big thanks to everyone who joined us. We hope you enjoyed the concerts. See you next year!