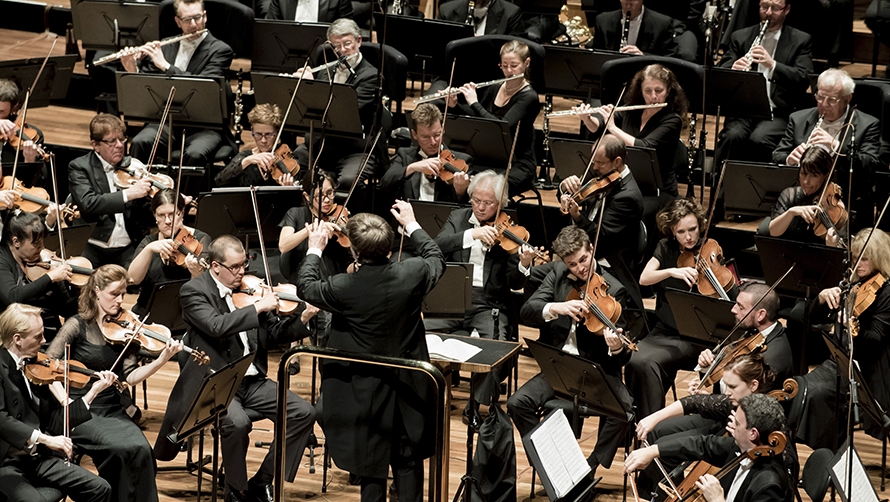 A virtuosic orchestral portrayal of love, the Fifth Symphony occupies a pivotal place in Mahler’s output – it is his first purely instrumental symphony since the First. Written over 1901 and 1902, it charts the development in his love affair with his future wife, Alma Schindler (later Alma Mahler).

The symphony is unusual in that it is divided into five movements rather than the more traditional four, although it is grouped into larger parts. Part I: Trauermarsch (Funeral March); Stürmisch bewegt, mit größter Vehemenz (Moving stormily, with the greatest vehemence). Part II: Scherzo. Part III: Adagietto; Rondo-Finale

The first movement begins with funeral music, featuring the summons of the single trumpet. This leads to a mournful melody offered initially by first violins and cellos, then taken over by the woodwind.

The turbulent second movement is closely linked thematically to the first. It is marked by a repeated motif in the cellos and double basses, interrupted by the cry of the woodwind. The cellos introduce a second melody which develops before being fragmented by references to the first, and finally culminating in a stormy outburst which then dwindles to nothing.

Herbert von Karajan once said that when you hear Mahler’s Fifth, “you forget that time has passed. A great performance of the Fifth is a transforming experience. The fantastic finale almost forces you to hold your breath.”

The third movement, the Scherzo, is the longest and acts as the centre to the whole symphony. Broadly it includes two trio sections, followed by a final coda. It is striking in its contrast to what has gone before it – being more cheerful and optimistic than the previous two movements.

The famous Adagietto (fourth movement) is Mahler’s love letter to his new bride, Alma. It is this movement that was made famous in Visconti’s 1971 film Death in Venice. Marked ‘very slow’ and ‘soulful’ this is music of inexpressible beauty, reducing the orchestra down to harp and strings.

The Rondo-Finale follows on immediately from the Adagietto that has gone before, although much more lively than the previous movement. It utilises themes heard elsewhere in the symphony, including those from the Adagietto and the chorale that ends the second movement. It has been noted that this is the last symphonic movement Mahler wrote where there is unalloyed joy – later symphonies are unavoidably linked with the heartbreak that overcame Mahler’s life.

The Adagietto – Mahler’s love letter to his new bride, Alma – was performed as a standalone piece by Leonard Bernstein at Robert Kennedy’s funeral in 1968.

The Guardian has labelled the Rondo-Finale as ‘the finale to end all finales’.

After conducting its premiere, Mahler is reported to have said: ‘Nobody understood it. I wish I could conduct the first performance fifty years after my death.’

According to Naxos, Symphony No.5 is the most recorded of all Mahler’s symphonies.

Alma was unable to attend the premiere of the work due to illness, to which Mahler was deeply disappointed.