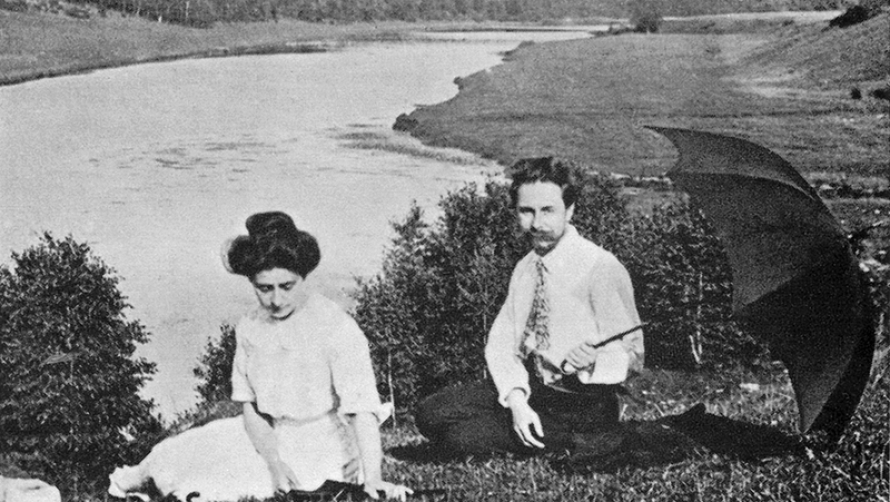 The MSO commemorates the centenary of Alexander Scriabin’s death with a performance of his ‘Divine Poem’ Symphony. A suitable title, since the composer regarded himself as a divine presence.

Alexander Scriabin’s Symphony No.3, The Divine Poem, is given a rare performance by the MSO this month. The composer, small of stature but towering in terms of self-imposed grandeur, intended his work to depict the evolution of the human soul and its ultimate union with the cosmos. Scriabin, clearly, didn’t reach for the stars: he aimed for the outer limits of the universe.

The Divine Poem, composed in 1904, represented a new direction for Scriabin, whose studies of philosophy were embodied in the symphony’s startlingly abstract structure. As one commentator says, ‘Scriabin was the first [composer] actually to invoke mysticism rather than portray it’. The work demands concentration from the listener — or, as the composer had it, to go beyond routine perception to a heightened form of concentration.

Certainly, Scriabin himself was driven by an extraordinary creative imagination, leavened with more than a dash of eccentricity. Put it this way — anyone born on Christmas Day (old Russian calendar) who, at various stages in his 43 years, tried to walk across Lake Geneva, preached to fishermen, and declared to his journal, ‘I am God’, might well be a few crotchets short of a symphony. It didn’t help when, towards the end of his life, Scriabin welcomed the Great War, describing it as the first step towards cosmic regeneration.

It is worth recalling that Scriabin’s unrealised vision was a huge apocalyptic piece, Mysterium. This would have made Wagner’s Ring cycle a mere supporting attraction. Scriabin intended Mysterium to run for seven days, and be performed in the foothills of the Himalayas. There would be sunrises, sunsets, sheets of fire and heady perfumes scenting the rarified air. Alas, only preliminary sketches survived.

Sketch of the Concert Ball for Mysterium by Scriabin

One hundred years after his death, Scriabin is still celebrated more for his vast output for piano: hundreds of preludes, études and poems, including 10 piano sonatas. Early on in his composing career, having injured his right hand during piano practice, Scriabin composed a series of left-hand pieces. His works would be performed by the greatest virtuosi, from Rachmaninov to Richter.

Scriabin was also affected by synesthesia: a rare neurological condition linking musical notes with colours. To his mind, for example, C was red, G was orange, D was yellow, A was green, E was pale blue, F sharp was bright blue, A flat was purple, and E flat metallic grey-blue. In his fifth, and final, symphony, The Poem of Fire (1910), Scriabin devised a clavier à lumières (keyboard with lights), which controlled ‘coloured light in the form of beams, clouds and other shapes’. Latter-day musicians affected by synesthesia include the violinist Itzhak Perlman and the pianist Hélène Grimaud.

Scriabin died when he was just 43. It should have been a more romantic departure — say an ascent into the boiling clouds to fanfares, splendid heavenly choirs and spectral bursts from the clavier à lumières. Alas, he died from septicaemia caused by a shaving cut.