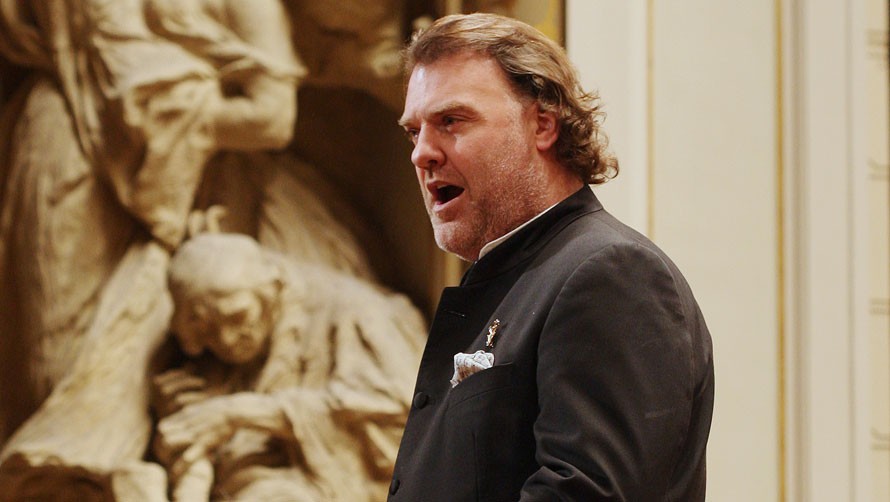 Next April the Melbourne Symphony Orchestra will celebrate Sir Andrew Davis’ official return to Australia as its Chief Conductor with an exhilarating concert featuring one of the greatest singers of our time, Welsh bass-baritone Bryn Terfel.

To be held on Friday 26 and Saturday 27 April, 2013 A Joyous Celebration Gala will be a celebration of great music as the MSO sets out on a new journey under the direction of an inspiring conductor.

“Sir Andrew Davis and Bryn Terfel have performed together all over the world, from the Last Night of the Proms at the Royal Albert Hall in London to the stage of the Metropolitan Opera in New York. There could be no more appropriate guest artist to mark Sir Andrew’s inaugural concert as Chief Conductor of the MSO,” said Huw Humphreys, MSO Director of Artistic Planning.

Terfel rose to prominence when he won the Lieder Prize in the 1989 Cardiff Singer of the World Competition. He has performed in all the great opera houses of the world, and is especially recognised for his portrayals of Figaro, Falstaff and Wotan.

“As the most sought-after Wotan of our time in Wagner’s Ring Cycle, we are delighted to present Bryn Terfel in excerpts from Das Rheingold and Die Walküre as well as in Beethoven’s Symphony No.9. It is sure to be a magical night of music making, fitting for the start of the MSO’s journey with Sir Andrew at the helm,” Humphreys continued.

In these concerts – Terfel’s only Melbourne appearances – he will open the program performing music from the radiant final scene from Das Rheingold, as well as Wotan’s Farewell, the beautiful and moving excerpt from Wagner’s Die Walküre, in which Wotan, king of the gods, casts his daughter Brünnhilde into a magic sleep.

In the second half, Terfel will be joined by Australian mezzo-soprano Sally-Anne Russell and two young artists from the Lyric Opera of Chicago –Tracy Cantin (soprano) and John Irvin (tenor) – as well as the MSO Chorus in a performance of Beethoven’s Symphony No.9. The pinnacle of Beethoven’s achievements, his Ninth Symphony traces a path from chaos and darkness to a light illuminated by Friedrich von Schiller’s ode To Joy, in which Orchestra, chorus and vocal quartet convey an immortal message of universal brotherhood.

Terfel’s performance highlights in 2012 include the role of Wotan in Wagner’s Ring Cycle for the Royal Opera House, Covent Garden and the Metropolitan Opera, New York; the title role in Der fliegende Holländer for Zurich Opera, and Scarpia for Bayerische Opera, Munich. Terfel was also a torch bearer during the Olympic Torch relay in Wales.

A versatile concert performer, Terfel’s highlights range from the opening ceremony of the Wales Millennium Centre to the Last Night of the Proms and the Royal Variety Show. In 2007 he sang the title role in concert performances of Sweeney Todd as part of the re-opening of the Royal Festival Hall, London and has given recitals in the major cities of the world and for nine years hosted his own festival in Faenol, North Wales.

Sir Andrew Davis was announced as Chief Conductor of the MSO in June 2012 for an initial period of four years. His MSO concerts in 2013 include works such as Verdi’s Requiem, Britten’s Four Sea Interludes from Peter Grimes, Strauss’ Thus Spake Zarathustra and Elgar’s Enigma Variations.