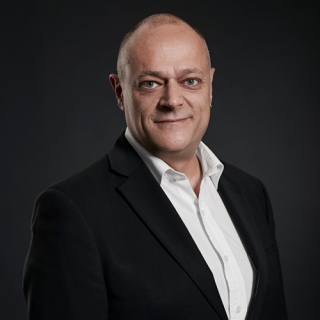 Robert Cossom was born in Hobart, and learned everything he knows from Eric Johnstone and Tom O’Kelly. He is proud to have worked with and to be a friend of them both. He starting playing casually with the Tasmanian Symphony Orchestra at age 15, and was appointed to a permanent position in the Melbourne Symphony Orchestra in 1995. Personal highlights of his MSO career include playing with KISS and The Wiggles, and working with Sir Andrew Davis. He created and endows the MSO Snare Drum Award for undergraduate students.

Robert’s music has been played by, among others, the TYO Percussion Ensemble, the TSO and the MSO Chamber Players. He has also been composer-in-residence for the Sydney Youth Orchestras.

Robert likes sunsets, long walks on the beach, and being caught in the rain. He is supported by Zildjian, Evans Drumheads, Pearl Drums and Just Percussion. His music is published by Rhythmscape Australia.