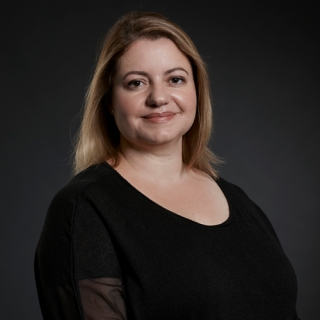 Michelle Ruffolo was born in Melbourne in 1977 and received her first violin lessons at the age of 4.

Michelle has appeared as soloist with many orchestras including the Zelman Orchestra, the New Monash University Orchestra, the Collegium Musicum Lübeck (Germany) and the “M-Jora” Philharmonic Orchestra (Rumania). She also has vast experience as an orchestral musician, having performed frequently with the Erasmus Chamber Orchestra (Netherlands), Concertmaster of Orchestra Victoria, Concertmaster of the Stade Chamber Orchestra (Germany), the Nord Deutsche Rundfunk, the Frankfurt Radio Orchestra and the camerata lübeck under the direction of Charles-Andre Linale (Orpheus Quartet), Martin Haselböck, David Geringas and others.

In 1995, Michelle won the “Nuovi Applausi Divella” Radio Competition (Italy) which enabled her to enter the class of Sergei Fatkulin and Zachar Bron in Madrid, Spain. In 1997, Michelle moved to Germany and continued her studies with Nora Chastain and then Sebastian Hamann at the Musikhochschule Lübeck. During this time she attended many masterclasses as an active participant, including those given by Ruggiero Ricci, Valeri Klimov and Ida Bieler.

Michelle joined the piano trio “Trio 3.0.3” after having won the National Chamber Music Competition and has toured with the trio in Australia, China, Italy, Germany, Switzerland and Austria, where a number of performances were broadcasted live. Trio 3.0.3 also studied from 1999 to 2001 with Hatto Beyerle (Alban Berg Quartet) in Hanover and Walter Levin (La Salle Quartet) in Basel and Lübeck.

From 2002 she was engaged, as 1st Violin tutti, with the Frankfurt Museumsorchester / Alte Oper and in 2005 became 1st Violin Tutti with the Melbourne Symphony Orchestra.