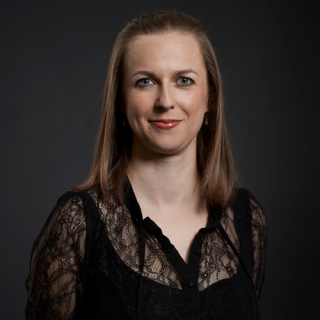 The first thing you notice about Kathryn is her fine bone structure and petite build, so it’s no surprise to learn she was a keen ballerina as a child. “I absolutely loved it and danced until I was 14. Then I had to decide which way to go, as my parents were encouraging me to focus on music. I also asked myself did I want the pain, and the answer was no! Playing the violin is a lot less painful than ballet.” Both her parents were long-time members of the TSO. “Growing up, music was the natural thing to do. It was just a given that I would play the violin, though I really loved the cello because I always heard Mum playing it, but my hands are too small!”

Kathryn has won many awards and scholarships, was accepted into the Mastercourse at the Australian National Academy of Music and had several overseas tours with the AYO, most recently in 2004.

She’s the proud owner of a rather special instrument with a “melting, sweet sound” she says. “My violin belonged to a retired colleague of my dad who offered it to us after hearing a recording I had made. It has been attributed to Evangelisti, an 18th century Florentine violin maker.”

Was it love at first sight with the violin?

I was actually fairly indifferent initially, but I didn’t question it and by about nine years old I was completely hooked and couldn’t wait for my lessons.

What has been one of the highlights of your career?

Playing in the Concertgebeouw and at the Proms was a highlight for me. It was awe-inspiring to perform in such world-renowned concert halls. The response of the audiences was special too. They have such a passion for music.