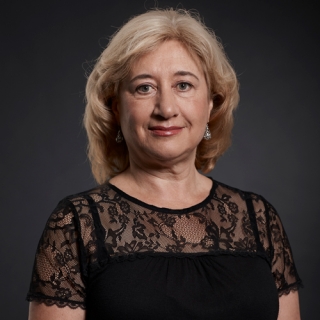 Eleanor Mancini has been a member of the Melbourne Symphony Orchestra since 1980 playing in the First Violin section. Eleanor studied at the famous Stolyarsky School of Music in Odessa, Ukraine for 12 years, finishing with top honours, and completed her Bachelor degree in Moscow with the Russian Academy of Music under Professor Peotr Bondarenko, David Oistrakh’s assistant. She also studied Quartet class with the renowned 1st Violinist of the Borodin String Quartet, Rostislav Dubinsky. Since moving to Melbourne in 1979, Eleanor has performed with various chamber groups including Pro Arte, Melbourne Musicians and the Philharmonia of Melbourne, for which she lead the second violin section for 12 years. In 1989 Eleanor performed as a soloist with the MSO in the “Hoffnung” Festival Concert at Hamer Hall and says that she will never forget this exhilarating experience of performing solo in front of the packed concert hall with then Chief Conductor Hiroyuki Iwaki in the audience. Eleanor says that returning to Russia with the MSO in 2003 and making documentary about the whole journey with the Foreign Correspondence was very emotional
experience for her.

Both concerts in St Petersburg, in Mariinsky and Smolny were major highlights of her musical career. In October 2004, as part of the Melbourne International Art Festival, Eleanor performed three quartets by Australian composers Elena Katz-Chernin, Larry Sitsky and Linda Phillips and in 2010 her newly established quartet Alla Corda participated in a tribute concert to the Musicians of Terezin. In 2011 her quartet group took part in the MSO Chamber Players concert performing a piece by her favourite Australian composer Elena Katz-Chernin.
Eleanor loves touring and is looking forward to tour Europe again under button of MSO new Chief Conductor Sir Andrew Davis.

My earliest musical memory is

I have three very vivid memories from when I was young.

1. I am about three years old with my mother in a recording studio, singing popular songs which I learnt from my family and recording them on disc.

2. I am five years old in Russia with my family in the room where all of us used to live and where I had my first, one of many jamming sessions; my mother and uncle on accordions, father singing, my grandfather on spoons and me singing and dancing and later playing violin.

The composer’s music I most enjoy playing in the MSO is?

My favourites are the big symphonic poems by Richard Strauss, early symphonies by Mahler as well as 20th Century composers like Shostakovich, particularly symphonies 5, 7 and 8, Prokofiev`s 3 and 5 and the Sinfonietta by Janáček. I LOVE Ravel’s Daphnis and Chloe Suite No.2 – it always gives me a buzz! I also enjoy playing American classics like Gershwin, Porter and Berlin.

How did you choose your instrument?

I wanted to play piano but the Director and Head of Strings at the Stolyarski School called my mother and recommended I take violin as a first instrument; he told her I was made for it, and he was right.

Where in Victoria do you most like to perform?

I like going on tours to regional Victoria, regardless of the venue we play in. Country audiences always embrace the music we bring to them, to see the joy and appreciation on people’s faces is an uplifting and fulfilling experience for all musicians.

Which musical figures would you invite to your house for dinner? And what would you serve?

I would invite Vladimir Ashkenazy, and would serve him a good Russian meal accompanied by reminiscences of our life in Russia and common friends. We`ll be discussing all the great music we played together over the years, starting with Vladimir`s first visit to Melbourne in the 80th playing my absolute favorite Beethoven 1st Piano Concerto, best I ever heard.