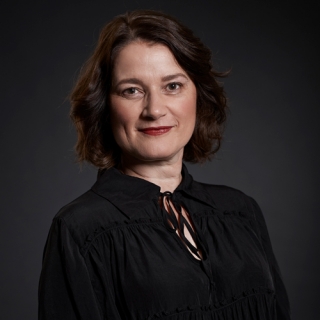 Deborah Goodall has been a member of the Melbourne Symphony Orchestra’s First Violin section since 1988. Born in Adelaide Deborah started the violin at the age of eight with Merier Roberts and from the age of 14 she studied with Beryl Kimber. In 1985 she graduated from the University of Adelaide with a Bachelor of Music (First Class Honours) having already performed as a soloist with the Adelaide Symphony Orchestra in the finals of the ABC Instrumental and Vocal Competition.

She went on several international tours with the Australian Youth Orchestra and Jeunesses Musicales World Youth Orchestra. Deborah studied in Berlin on a DAAD Scholarship before moving to Melbourne to take up her position with the MSO. In 1996 she won the Elton John Award and did further study in London and Toronto. She is married with two children and in her spare time enjoys yoga, gardening and making stuff with yarn and fabric.

The composers’ music I most enjoy playing in the MSO are…
Beethoven, Brahms, Mahler, Shostakovich and Stravinsky

If I had not become a musician, I’d be…
I did quite a lot of acting as a student so maybe an actor. Back in the day I was actually in a production for the State Theatre Company in South Australia of Blood Wedding and I had to share a dressing room with Geoffrey Rush which was pretty exciting, although I’m sure he doesn’t remember

What are three of your favourite possessions?
My dog and cats, although I think sometimes they own me